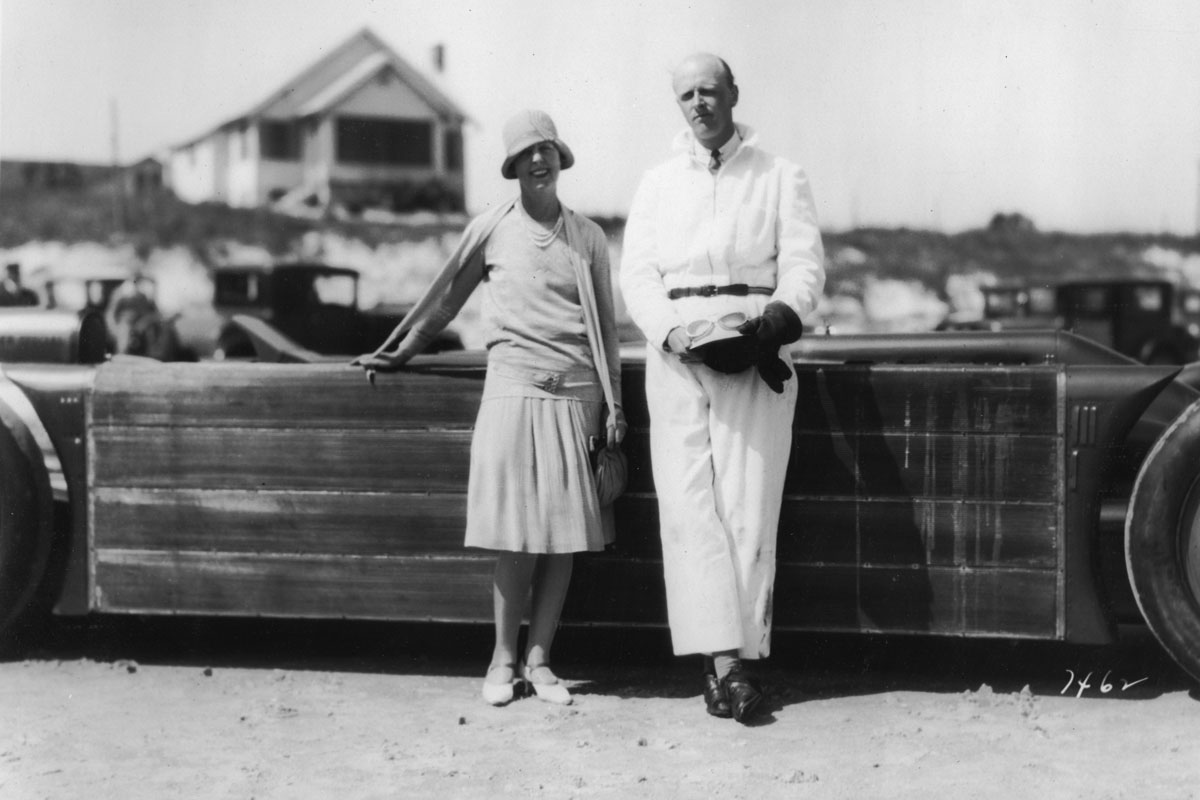 Doris Stocker was born in India in 1886, the second of three children. Her father, George, was an engineer in Bombay. When Doris was five years old, her mother Mary returned to England, taking her three children with her. George remained in India.

Settled into their London home, Doris’s older sister, Blanche took to the stage and her younger sister soon followed. As early as October 1904, ‘The Illustrated Sporting and Dramatic News’ reports that Doris “has been before the public about seven months” and that “Miss Stocker is devoted to her work and her progress may be predicted”. 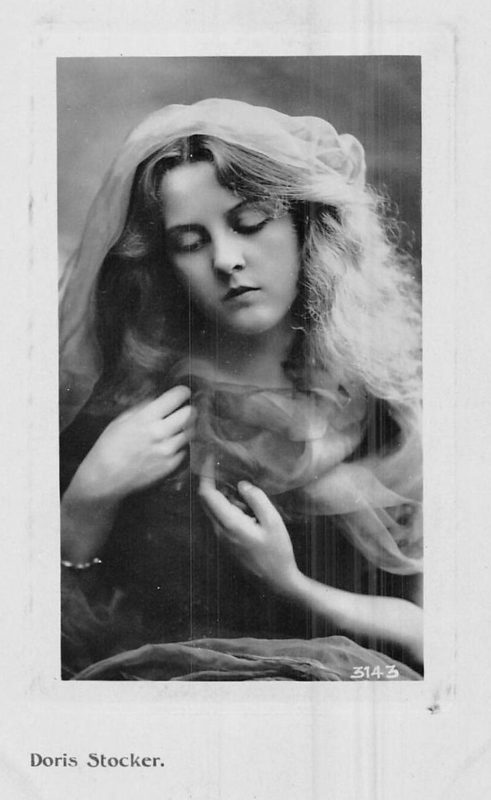 The Stocker sisters soon established themselves on the London stage. Doris in particular was singled out for her beauty and charm rather than for her acting talents. ‘The Bystander’ in its 15 August 1906 edition, debates the question of “Who is the prettiest actress?” and lists Doris Stocker “whose countenance is the very incarnation of youthful merriment and innocent fun”. One of her early roles was in “a musical fairy play” titled ‘Two Naughty Boys’. This two act production had a run at the Gaeity Theatre and Doris Stocker played Daffydowndilly “the beautiful fairy queen”.[1]

As with today’s celebrities, Doris’s social life was reported in detail in the press. ‘The Bournemouth Evening Echo’ (7 June 1905) reports “theatrical stars driving down in their motor-cars from London to the Riviera Hotel, Maidenhead for an annual “motor meet”. Attendees listed include Doris Stocker and the female motoring pioneer Dorothy Levitt“ and a host of other pretty women”.[2] ‘The Yorkshire Telegraph’ (5 December 1912) runs a piece on the lavish Pantomime Ball held in the Albert Hall in London. It reports that “Miss Stocker pirouetted as columbine, all in pink”. Other visual delights included Lady Mond who “furnished a surprise” by dressing – with “all her party” – as a Christmas cracker, which proceeded to parade towards the royal box. On what was clearly a slow news day, ‘The Daily Mirror’s’ 11 September 1916 ‘This Morning’s Gossip’ page ran a feature stating that “Miss Doris Stocker’s Pekinese dog wandered away from it’s mistress’s house the other day and inconsiderably forgot to return.” Doris is pictured with the errant animal, presumably before it went on its travels.

Doris Stocker retired from the stage in 1917 upon her marriage to Henry O’Neal De Hane Segrave. At the time, Segrave was serving in the First World War as a Captain in the Royal Warwickshire Regiment and the Royal Flying Corps. Doris’s life moved into a new chapter as she supported her husband in his quest for speed.

Mrs Segrave (as she then was) features in film and photographs from the record-breaking Daytona Beach run of the Golden Arrow in 1929, including an image of her by her husband’s side as he calls sponsor Lord Wakefield to advise him of his success. 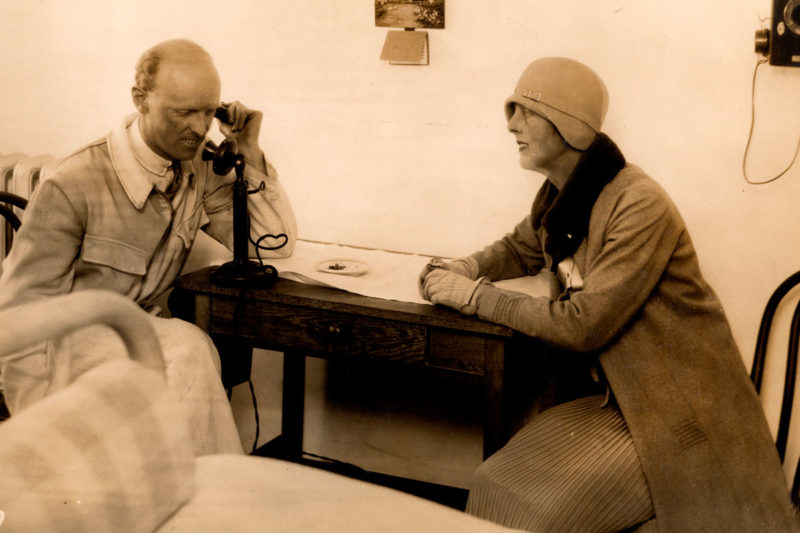 Her contribution is depicted in the press of the period very much in the terms of her femininity, with frequent reminders of her past in musical theatre. ‘The Daily Mirror’ in its ‘To-days Gossip’ column on 15 April 1929 relates her return from Daytona as follows:

“Mrs Segrave particularly wanted to get back home to see how her daffodils, which she planted in her garden before leaving, were coming on”.

It is interesting to note that, perhaps in light of the tragedy of Segrave’s death, the same publication takes a more sombre note in retrospect to the Golden Arrow’s record attempt in its 14 June 1930 piece:

“Lady Segrave accompanied her husband to Daytona Beach, but before leaving Southampton she said “I do not think I can bear the terrible ordeal of watching my husband risk his life” With great pluck however, she changed her mind and after his great achievement she said she had seen him fly past her and then shut her eyes.”

Doris’s recasting as stoic widow was still to come when this rather disparaging piece was written in ‘The Bystander’s ‘If Gossip we must’ column published on 24 April 1929:

“The major’s wife was Doris Stocker, and is a very pretty blonde. Gilded youths who worshipped at the shrine of the Gaiety some fifteen or twenty years ago (most of them are staid married men now, and the war killed off the remainder) will remember the beauteous Blanche and Doris Stocker; who never had anything in particular to do, but did in remarkably well.”

Segrave was knighted after his Golden Arrow triumph. He then turned his focus to the water speed world record, culminating with him losing his life on Lake Windemere on 13 June 1930 when his boat, Miss England II, crashed. The following day, ‘The Lancashire Daily Post’ reported “Lady Segrave’s Premonition”:

“I am nervous about to-day’s attempt. I feel something may happen. I don’t know how to explain it, but there is something that tells me that things are not going well. I have been confident all week, nothing has disturbed me, yet why should I feel like this today?”

This was claimed to have been revealed to the Daily Mail correspondent on the day of the crash. 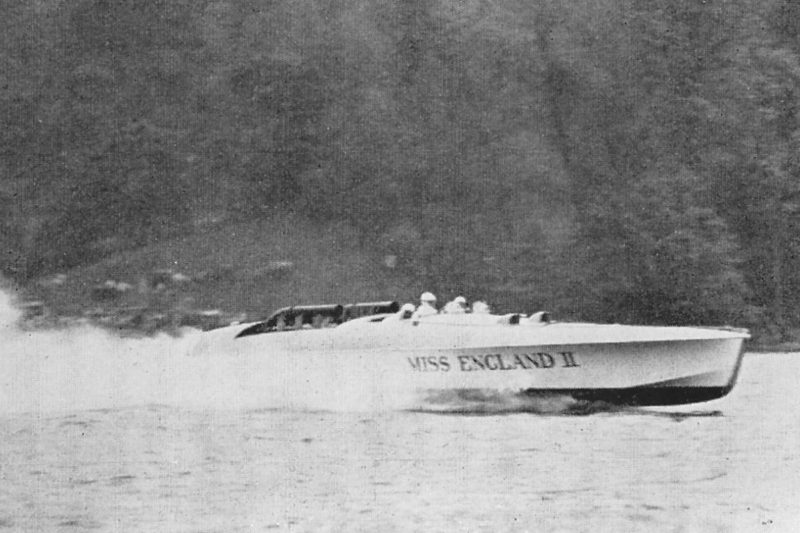 Sir Henry Segrave’s funeral was held in a small chapel in Golders Green, London. Police had to be deployed to keep spectators away. Only four attended the ceremony – Segrave’s parents, his sponsor Lord Wakefield and of course Lady Doris Segrave –  and three wreaths permitted. ‘The Evening Telegraph and Post’ (17 June 1930), writing about “the grief stricken widow” notes that:

“The most touching scene of these was from Lady Segrave. It was a white harp of lilies in the centre of which was a spray of blood red roses, symbolising a bleeding heart.”

Lady Segrave wrote a well-argued and also touching article in 1931 reflecting on the quest for speed and the impact upon those closest to the risk-takers. It was titled ‘Should We Sacrifice Lives for Speed?’ and was no doubt syndicated, with this researcher finding it in ‘The Lincolnshire Echo’ dated 12 May 1931. Lady Segrave argues that those trying to break speed records are highly cognisant of the risk to their lives and build in as many safety features as possible to mitigate it. She acknowledges the motivation for personal glory but also, especially in her husband’s case, the desire to bring glory to his country, England. She concludes:

“And what of the wives of these men? Their task is scarcely less arduous than that of their husbands. Despite their natural fears, despite anxieties and qualms, they assist, encourage even, and face the future bravely. Certainly not theirs to deter and hinder.

Scarcely a day passes without brave men risking their lives in some part of the world in dare-devil enterprises. Their women-folk share the risks, as they share in the joy of achievement when dangers are overcome and courage has conquered.”

Doris Stocker died in 1968 at the age of 86. She and Sir Henry did not have children and she did not remarry. Her part in his legend has yet to be fully recognised but she was clearly a lot more than a “very pretty blonde”.