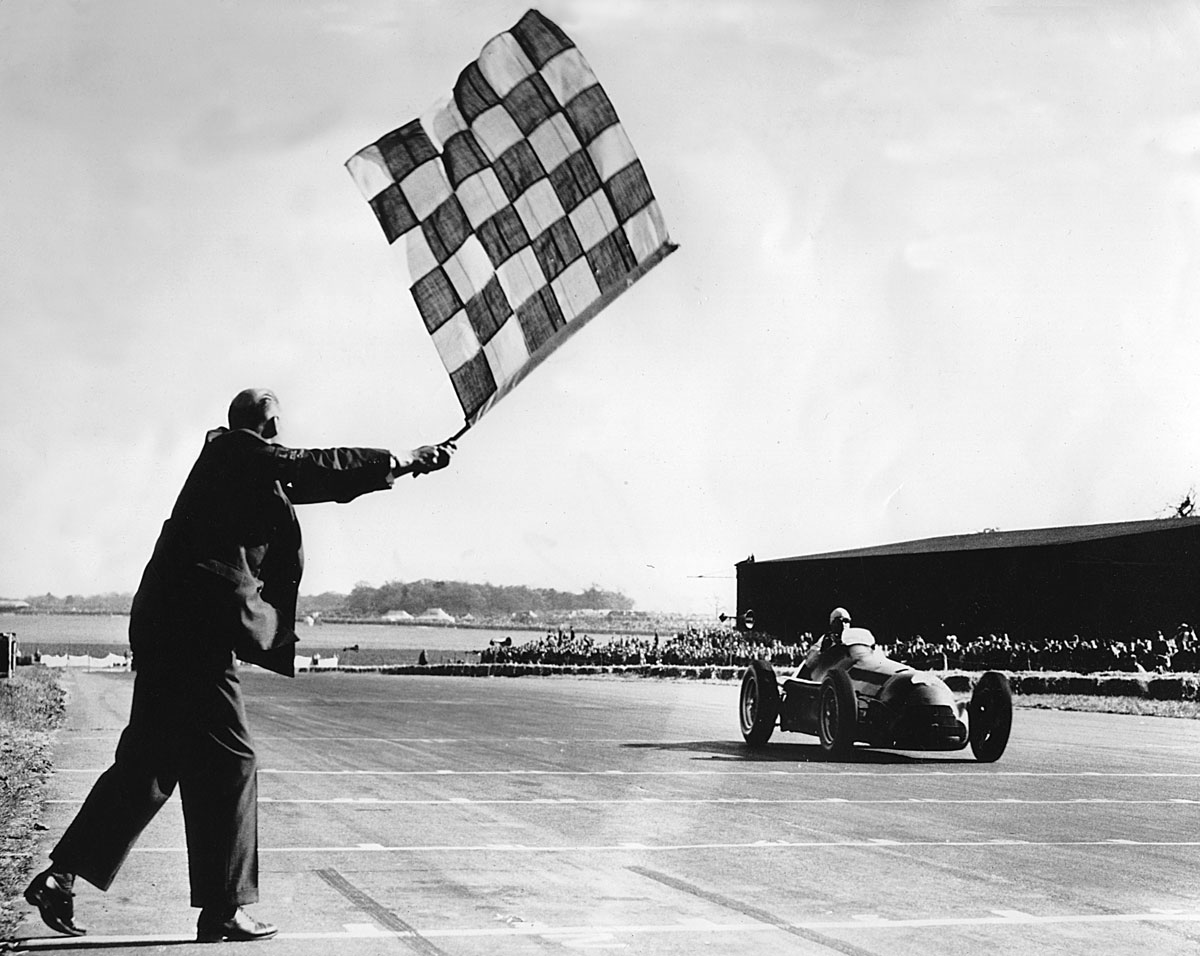 The 13th May 2020 marks the anniversary of a significant event in motor sport history. The 1950 British Grand Prix, held at the Silverstone circuit, was the first race in the new FIA World Championship for Drivers. In that first year, the championship was contested across six European Grands Prix and the Indianapolis 500 in the USA; a far cry from the modern championship of over twenty races spread across four continents. Research and Enquiries Officer, Patrick Collins, explores this story.

Although the Formula One regulations for Grand Prix motor racing had been introduced in 1946, the World Championship was a new innovation for the 1950 season. That inaugural Championship race was dominated by Alfa Romeo, and in particular by Giuseppe Farina. The Italian driver started from pole position and led for the entire race, setting the fastest lap in the process. He would go on to be crowned World Champion that year.

The early years of the World Championship, indeed much of the 1950s, were dominated by the red cars of the Italian grand marques: Alfa Romeo, Maserati and Ferrari; while Alberto Ascari and the great Argentine hero Juan Manuel Fangio vied for the World title. For two years, 1952 and 53, the World Championship was run to Formula Two regulations. Italian domination was challenged in the first two seasons of the new Formula One rules in 1954 and 55 when the Silver Arrows of Mercedes Benz achieved total domination. British hopes of success, initially pinned to the BRM project, would eventually see Mike Hawthorn become Champion in 1958 (driving for Ferrari) while the British Vanwall team would win that season’s newly introduced Constructors World Championship. A new era of British domination of Formula One was just beginning.

British teams and drivers would remain at the forefront of the sport for decades to come. Cooper, BRM, Lotus, Brabham, Tyrrell, McLaren and Williams each had their time at the front of the grid, with their drivers on the winner’s podium. While British drivers such as Graham Hill, Jim Clark, John Surtees, Jackie Stewart, James Hunt, Nigel Mansell and Damon Hill became champions, and household names, there were plenty of other heroes for the fans to follow. Brabham, Hulme, Rindt, Fittipaldi, Lauda, Andretti, Scheckter, Jones, Piquet, Rosberg, Prost, Senna and Schumacher are just a few of the glittering array of truly international World Champions from the seven decades. Sadly, we also remember the  names, far too many of them, of those that paid the ultimate price for the pursuit of success; some champions, others denied that accolade. Fans will never forget the likes of Musso, Collins, Bandini, Clark, Rindt, Siffert, Cevert, Peterson, Villeneuve and Senna and so many more.

Decade by decade the technology and the appearance of cars changed dramatically. Rear engines became the norm at the start of the 1960s and within ten years wings and aerodynamics became all-important in an effort to increase downforce (while most of the cars were powered by the ubiquitous Ford Cosworth DFV engine ). The traditional national racing colours gave way to sponsors’ names and liveries. Over the years and changing rules, engine capacities have gone up and down, horsepower has risen, numerous technical innovations (ground effect, turbochargers) have been developed, and then outlawed. The lightweight carbon fibre, computerised, hybrid cars of today bear little resemblance to those driven by Farina at that first World Championship Grand Prix, but the glamour, spectacle and excitement remains. Today, worldwide crisis permitting, a new generation of heroes, Hamilton, Vettel, Leclerc and Versteppen continue to vie for the title of World Champion, seventy years on from that day at Silverstone.

Formula One cars have long been a part of the collection at the National Motor Museum where iconic machines such as the 1950 BRM, 1967 Lotus 49, 1996 Williams FW18 and others can be seen.

To mark Seventy Years of the World Championship we share with you a selection images from our photographic collection, showing some of the amazing cars and famous drivers that have thrilled us across seven decades.