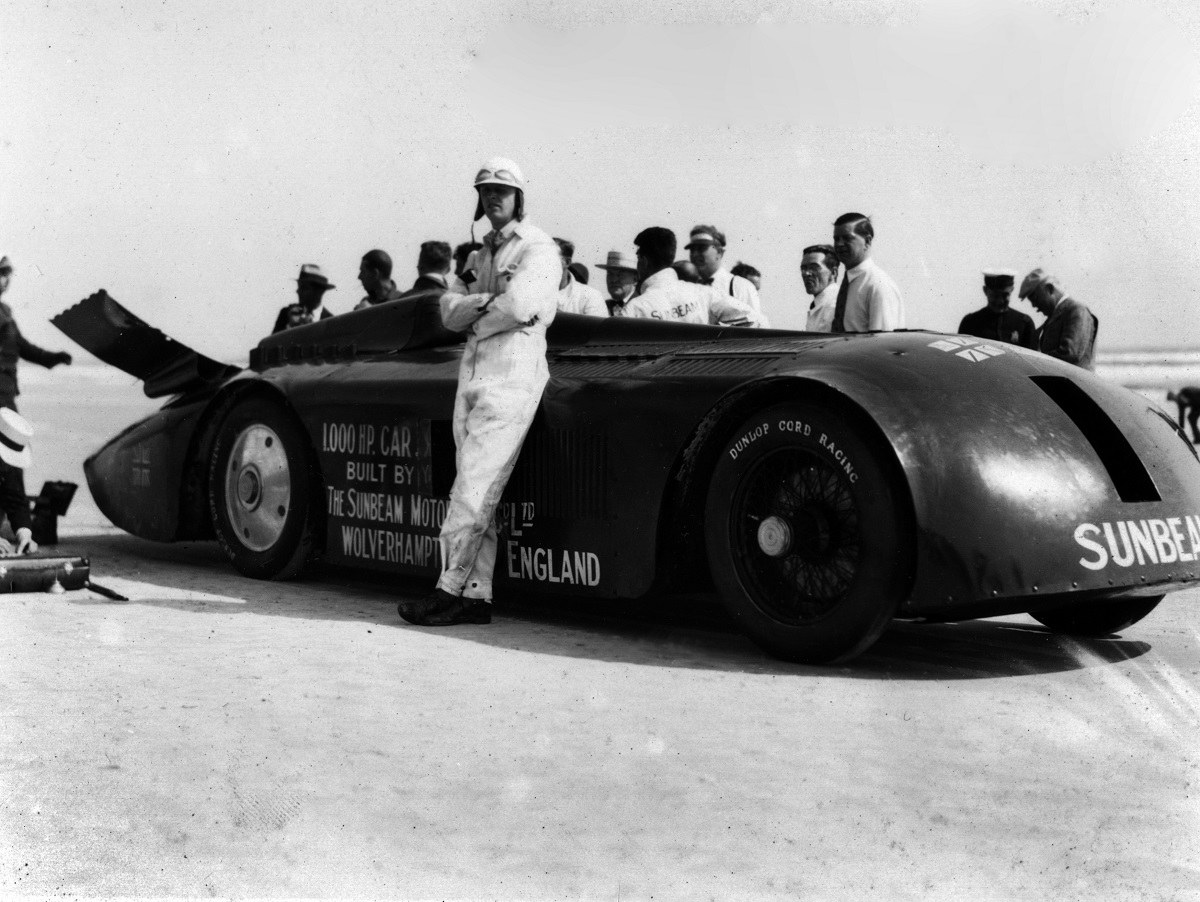 Among the best known of the personalities associated with the Land Speed Record is that of Sir Henry Segrave, who broke the outright record on three occasions in the 1920s. Although probably of no-great significance, it is none the less interesting to note that all three of his Land Speed Records were attained in the month of March.

Already a house-hold name in Britain following his success driving racing cars for the Sunbeam-Talbot-Darracq combine and the first Briton to win a Grand Prix motor race (the 1923 French Grand Prix at the wheel of a Sunbeam) in 1926 Segrave turned his attention to the Land Speed Record. The speed to beat, achieved by Malcolm Campbell in the famous 350hp Sunbeam at Pendine in July 1925, was 150.87mph.

Sunbeam, happy to support their famous driver and for their name to continue to be associated with the glamour of the Land Speed Record, presented Segrave with a newly developed a 4-litre (3,976cc) V12 powered car, later to also achieve racing fame known as the ‘Tiger’, with which to attempt the record on 16th March 1926 on Southport Beach. With little fuss, and watched by very few spectators, Segrave raised the record to 152.33mph.

The focus of the record-breaking community was now set on the 200mph figure. A few weeks after Segrave’s run, J. G. Parry Thomas raised the record to 170mph in the 27 litre Liberty aero-engine powered ‘Babs’ at Pendine. In February the following year it was Malcolm Campbell’s turn again, attaining 174mph in the first incarnation of his new ‘Blue Bird’.

Segrave and Sunbeam had the magic 200mph firmly in their sights and built an incredibly powerful new car with which to achieve it. Powered by two of the company’s 22 litre Matabele V12 aero-engines, each capable of producing 435hp, the car was christened the 1,000hp Sunbeam; a name that, while not strictly accurate, no doubt appealed to Sunbeam’s directors and marketing department. No venue long enough to achieve such a speed could be found in Europe and the thirteen mile long beach at Daytona in Florida became the new arena for record attempts.

The record attempt took place on the morning of Thursday, March 29th 1927 with an estimated crowd of 30,000 spectators watching from the nearby sand dunes. The required two runs were made over the marked course with a change of tyres in between. During the outward run a strong side wind caused the car to swerve and skid violently and Segrave had to drive the car into the sea to slow it down at the end of the run! The speeds achieved on the two runs were 200.668mph and 207.015mph giving an average speed of 203.792mph over the mile and a new Land Speed Record – the first over 200mph.

The quest continued. In 1928 the record fell twice more at Daytona, first to Campbell who achieved 206mph in February and then the USA’s Ray Keach in the rather scary Triplex Special (powered by three 27 litre Liberty engines) nudged ahead with 207mph.

Segrave was determined to regain the record for Britain. He put together a consortium of British engineers, manufacturers and sponsors to build a car they hoped might achieve 250mph. Designed by Captain J.A. Irving, who had carried out the detailed design work on the 1,000hp car, the new car was powered by a 24 litre Napier Lion engine from a racing seaplane. Named the Irving Napier Special, the distinctive, streamlined, gold painted car was popularly known as ‘Golden Arrow’. With efficiency typical of Segrave, the car was designed and built to schedule and shipped to Daytona ready for its record attempt. On 11th March 1929 huge crowds once again gathered on Daytona Beach to watch Segrave make his two timed runs through the measured mile; 15.55 seconds on the first run, 15.57 on the second. The speed of 231.446mph exceeded Keech’s record by 24mph.

March was certainly a successful month for Segrave.

Golden Arrow is part of a collection of record-breaking cars at the National Motor Museum, where it is displayed with its predecessor the 1,000hp Sunbeam and the three time record holder 350hp Sunbeam. A new Arts Council England funded project, The Golden Arrow – Shot from the Past, Aimed at the Future will interpret and re-tell the inspiring stories behind this truly iconic machine and the people who were associated with it.