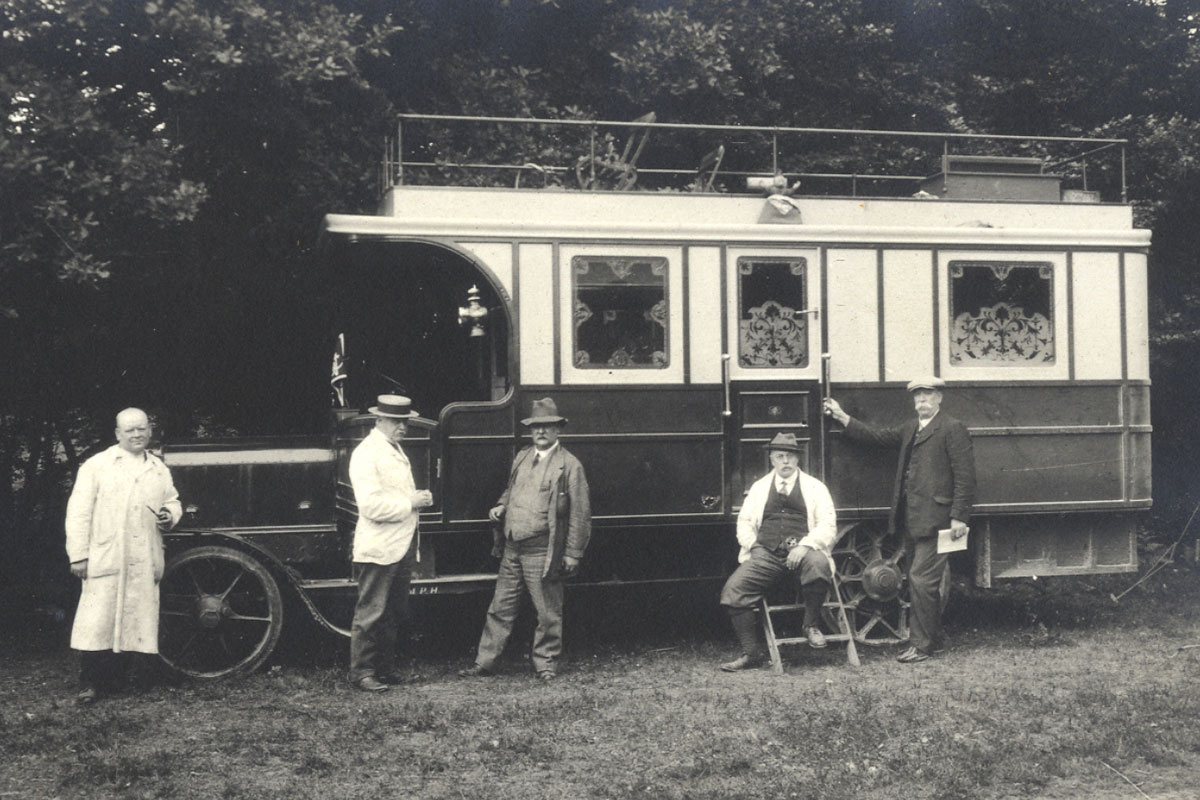 The earliest days of the Caravan and Motorhome Club often conjure up idyllic scenes of horse-drawn caravans, exploring the countryside at a slow and quiet pace. Yet a handful of members went against the convention and predicted that the hobby’s future lay with motorised technology. Here Angela Willis, Curator of the Caravan and Motorhome Club Collection, celebrates the few pioneer motor caravanners of the early twentieth century.

The caravan holiday first became popular with the Victorians after a somewhat eccentric author and retired Naval Surgeon, Dr William Gordon Stables, commissioned the world’s first leisure touring caravan. Stables named this luxurious horse-drawn ʼvan The Wanderer, first taking to the road in 1885. Others soon followed Stables’ lead and took a caravan tour discovering the perfect way to leave behind bustling towns and cities to enjoy a more simple and healthy lifestyle. By the turn of the century the hobby had become fashionable among the rich, including professionals and women of wealth. So popular was horse-drawn caravanning by 1907 that a group of eleven enthusiasts gathered together to form The Caravan Club, now known as the Caravan and Motorhome Club, which represented and brought together those interested in the pursuit. Yet a few rejected the slow paced traditional form of caravanning, opting for a speedier way to travel offered by new developments in automobile technology. This group travelled in motor caravans, as the Edwardians called them, and these men and women traded in the tow-horse for mechanically-propelled vehicles with a self contained living space.

Incredibly, the concept of a motorised caravan is nearly as old as the horse-drawn leisure caravan, with roots stretching back to late 19th Century France. Perhaps the first vehicle to resemble a ‘motorhome’ was not powered by fuel, but by steam. Reported in The Autocar journal in 1897, ‘The Steam House’, was made by Parisian carriage builder Monsieur Jeantaund. It was a luxurious home on wheels propelled by a steam tractor built by French automobile manufacturer De Dion-Bouton. Designed very much like a railway carriage, it had rooms running off a side corridor including a kitchen area, dining room, a bathroom with lavatory and sleeping area. Space was even designed for the owner’s pet dogs who were housed in a cage fitted to the undercarriage. This unique ‘caravan’ was commissioned for use at an event in France to showcase new vehicle designs and technologies. Unfortunately, so grand was the project to build The Steam House that Monsieur Jeantaund was not able to finish it in time for the event. With no further use for it, the owner immediately offered the vehicle up for sale with a price tag of £1,200 – the equivalent spending power of over £72,000 today. We do not know the fate of The Steam House, but the concept was transferred to petrol-engined vehicles in France around the turn of the twentieth century. Yet this was a time when such technologies were in their infancy, and many roads were still in such a poor condition that they were often impassable for large vehicles. The motorhome appeared to be little threat to the nimble horse-drawn caravan.

Sometime between 1901 and 1908 the first motor caravan deemed ‘practical’ by Club founder and Honorary Secretary J Harris Stone, appeared on the roads of Britain. By ‘practical’, Stone probably meant that main roads were just about passable in it, as this caravan was still very sizeable. Owned by Mr. J.W. Mallalieu of Wavertree in Liverpool, this 40 horsepower ʼvan built by Belsize Motors Ltd weighed in at three tonnes. This motor caravan became the means of family holidays to Scotland and Wales among other destinations, and was designed to sleep six. However, there was no room for the family’s maid who was put up in local hotels at night. This caravan was quite a novelty, and is very likely to have been the lone motorhome of similar appearance satirised in 1908 by popular Punch cartoon illustrator George Morrow. The caricature poked fun at the growing craze for the caravan holiday as means to ‘get away from it all’, depicting a scene in the Scottish Highlands bursting with caravans and holidaymakers. Whether Mr Mallalieu was at one point a Caravan Club member, no record can be found in the Club’s archives, but his ʼvan paved the way for others to try out motorised caravanning.

Before the First World War there are only three known Club members who owned motor caravans, although there may have been more forgotten by time. J Harris Stone, despite welcoming their owners into the organisation, appears to have openly disliked the invention. Stone, a great supporter of traditional caravanning, saw lots of evidence that motor ʼvans were ‘contradictory to the true spirit of the pastime’. The horse-drawn caravan, more lightweight and compact design than the motorised version, enabled their owners to explore the countryside at their leisure and set up camp in places no others could reach. Stone wrote in 1913 that caravanners ‘are a set of people who positively dislike the main thoroughfares and highways, and much prefer the byways’. He witnessed many occasions where the sheer size and weight of motor caravans prohibited exploring off the beaten track. The speediness of the motor caravan also stood against the leisurely pace which traditional caravanners enjoyed. Stone observed the incredible differences in speed between the two types of vehicle commenting that one motor caravanner ‘the previous night… had slept at a place some eighty miles distant, and on the morrow he would sleep at a spot in the south, which it would have taken me in my van seven or eight days to reach’.

Mrs Madge Paton of Dundee was one of The Caravan Club members who owned a sizeable motor caravan, a 16-20 horsepower ʼvan built in 1912 which she named The Tortoise. The top of the van was designed to transport luggage, and inside was a dining room with stove and a compartment with two bunk beds. It also contained drawers and wardrobes for handily storing clothes and other items when on tour. A more lightweight design that offered a glimpse of things to come was the 35 horsepower Bristol ʼvan named Aeroplane owned by Club member Mr William Appleton of Weston-super-Mare. This compact caravan was more practically designed to travel to the open road than some of its larger counterparts. It also had the ingenious feature of a fixed sun canopy which pulled out around the vehicle when parked.  Appleton attended The Caravan Club’s 1910 Meet at Coulsdon, and attracted a great deal of media attention including photographs appearing in the Daily Graphic and The Autocar.

Yet one of the main pioneers of motor caravanning in the UK was Caravan Club member Albert Fletcher (1858 – 1925), a wealthy mill owner of Ashton-under-Lyne. Fletcher was a horse-drawn caravanner before being lured by the speed of motoring. Having handed over the running of his business to a trusted relative, this bachelor had the freedom and fortune to travel when and where he wished. His first motor caravan was built around Spring 1906, strikingly constructed of a polished American teak body on a Ryknield chassis. In Summer 1907 he is said to have covered 4,000 miles and could average sixty to seventy miles a day, quite a speed compared to The Wanderer which had a pace of two miles per hour. The ʼvan was built to contain sleeping compartments as well as kitchen space with a stove and sink. Perhaps most striking in design was the seating on top of the caravan, accessible by a stepladder, from which passengers could enjoy the view while travelling on the open road. This seating area was a design feature that Fletcher also included in his second motor caravan, built around 1913, it resulted from Fletcher’s experiences travelling in his first ʼvan. With a body built by Burton-on-Trent based Orton and Sons on a 10 horsepower Daimler chassis, similar to that used by furniture-removal vans of the time, it weighed five tons and could travel at 12 miles per hour.

Albert Fletcher was keen to share his passion of motor caravanning and the outdoors to those less fortunate by taking nurses from the local District Infirmary and the residents of a children’s home on frequent trips around Cheshire. He was also a regular feature at Caravan Club Meets, including the very first held in 1908 at Ockham in Surrey, despite the problems that came with driving a five tonne motor vehicle into a farmer’s field, particularly after wet weather. In 1913 J Harris Stone commented on an incident when ‘A large expensive motor caravan came to one of the Meets of the Club, but was unable to draw in through the entrance gates owing to its length. Had it achieved its entrance I was afraid it would have sunk into the field’. With so few motor caravans at the time, especially of this grand size, it is very possible that this comment was made about Fletcher’s ʼvan. Remarkably, letters written by Albert Fletcher to Daimler soon after the motor caravan was built have recently led to the original chassis being traced. This is all thanks to the unique chassis number being noted in the letters and the survival of the chassis number plate. Sadly, only the bare framework remains as the original body was broken up in the 1960s.

During the First World War many strides were made forward in the development of motoring technology. After the conflict ended the production of motor caravans continued to grow, but The Caravan Club focused on providing services to horse-drawn and later trailer caravan owners. It wasn’t until over 50 years after the pioneer motor caravanners were part of the Club that owners of motor caravanners were admitted to the membership once more.

Discover more about the Caravan and Motorhome Club Collection.