As part of the Arts Council England funded Golden Arrow project, National Motor Museum volunteer Peter Moss delves into the history of Golden Arrow and explores how it was constructed.

On April 19th 1928 it was announced that Sir Henry Segrave was to undertake the construction of a new Land Speed Record contender. Malcolm Campbell had taken the record from him in Bluebird at 206.956mph two months previously and although the increase over the speed of his Sunbeam ‘1000hp’ was only 3mph, Segrave was clear that a new design was essential to recapture the record. This view was reinforced when only four days later the American Ray Keech in his Triplex Special raised the record yet further to 207.552mph. 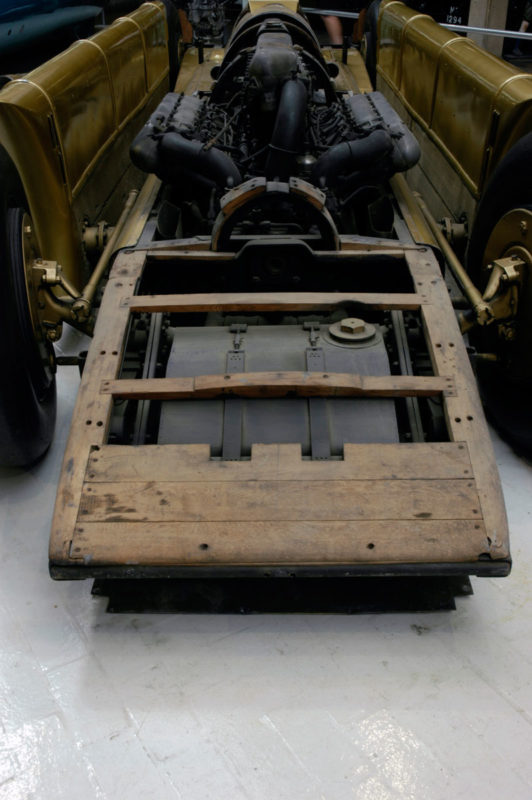 It was self-evident that as the rules governing the design of land speed record vehicles put no limit on engine size or power output, the most powerful engine available should be the sourced. Malcolm Campbell had already shown the way with the Napier W12 Lion engine, which had powered the Schneider Trophy-winning Supermarine aircraft so Segrave arranged to acquire one. It should be mentioned that Captain Irving, the designer of the car, was offered an engine from a foreign manufacturer producing 1250hp but the all-British nature of the project meant that the offer was refused.

There were three overriding engineering problems to solve:

(Wind resistance rises as the cube of speed, thus at 200mph, eight times more power is needed than at 100mph.) 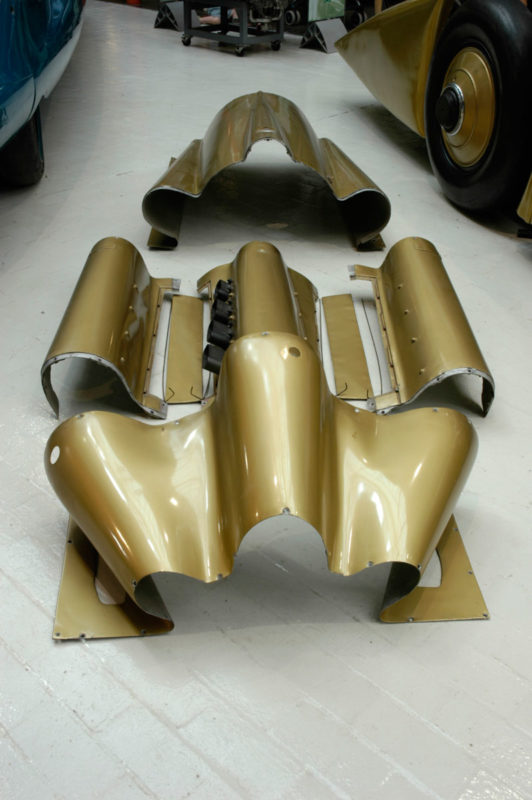 There was in fact no certainty that the projected 240mph could be achieved; calculations could be done up to 180mph but they then became problematical because of wind resistance. Using Segrave’s previous car, the ‘1000hp’ Sunbeam, as a yardstick, Irving reasoned that to achieve the target of 240mph a reduction in frontal area of 40% would be required. This led him to formulate a design that did away with a full-width wheel-enclosing bodywork in favour of a narrow body with the bonnet wrapped tightly around the three cylinder-banks of the engine and separately faired wheels with full depth inter-axle sponsons housing the radiators. The final shape was developed in a wind tunnel, including a fairing behind the driver’s head and a vertical tail fin for directional stability. The body was built in aluminium and painted gold by Thrupp and Maberley, the well-established coachbuilders in Cricklewood north west London. It was mounted on the chassis via wooden frameworks.

Irving designed many special features for the car. A very compact three-speed gearbox was used and the power was transmitted through twin propeller shafts to twin differentials, the purpose of this duplication being to allow the driver to be seated lower down between the shafts to reduce the frontal area. The surface radiators were mounted in the side sponsons and ice was used to give additional cooling.

Segrave chose the KLG Robin Hood factory in PutneyVale on the A3 to build the car, as he lived nearby and it had previous experience of building record breakers. KLG.  stood for Kenelm Lee Guinness, a fellow racing driver and a member of the Guinness brewing family who invented and manufactured the KLG spark plug. He had also been holder of the Land Speed Record from 1922 to 1924. Photos taken in the factory on January 1st 1929 (not a bank holiday back then) show the chassis almost complete with the engine installed, no mean achievement considering the project was only started less than eight months before. A further photo dated 23rd January shows the completed car. Segrave was well-known for his ability to charm the KLG workforce into doing overtime to achieve the desired timetable.

A further critical element of the vehicle was the tyres. Dunlop were asked to produce tyres capable of running at up to 250mph and after some research the tyre maker made tyres that were capable of running at 200mph for 3½ minutes. Segrave calculated that the two runs required over the measured distance would take 17½ seconds plus 1½ minutes at each end of the run so the total time running at high speed would be less than 3½ minutes.

While design and construction of the car was moving forward, Segrave was working on the logistical challenges of his record attempt. There was nowhere in the UK or Europe suitable for it and the 23 mile-long beach at Daytona in Florida had proved satisfactory in 1927. There were many technical difficulties involved, including closing the public beach, getting permission from the US authorities and getting timing equipment approved and certified. On top of this, shipping of the car and the team had to be arranged, firstly by liner to New York and thence by rail to Daytona Beach.

All this was achieved on time to allow Segrave to set a new record of 231.446mph on March 11th 1929 in Golden Arrow. In the words of Cyril Posthumus in his book ‘Land Speed Record’ it was “a striking example of professional design and construction.”