Welcome to the second blog from the Golden Arrow research project bought to you by students from Bournemouth University. Strap in for a speedy drive along the road less travelled as we share some findings regarding the lesser-known mechanics who were involved in keeping Golden Arrow running.

The men behind the photograph

The photograph below shows the mechanics who helped ensure Segrave’s 1929 Land Speed Record. Sustaining such a vehicle was a highly demanding task given the fact that many mechanical components of Golden Arrow were custom-made to cope with rapid speeds. 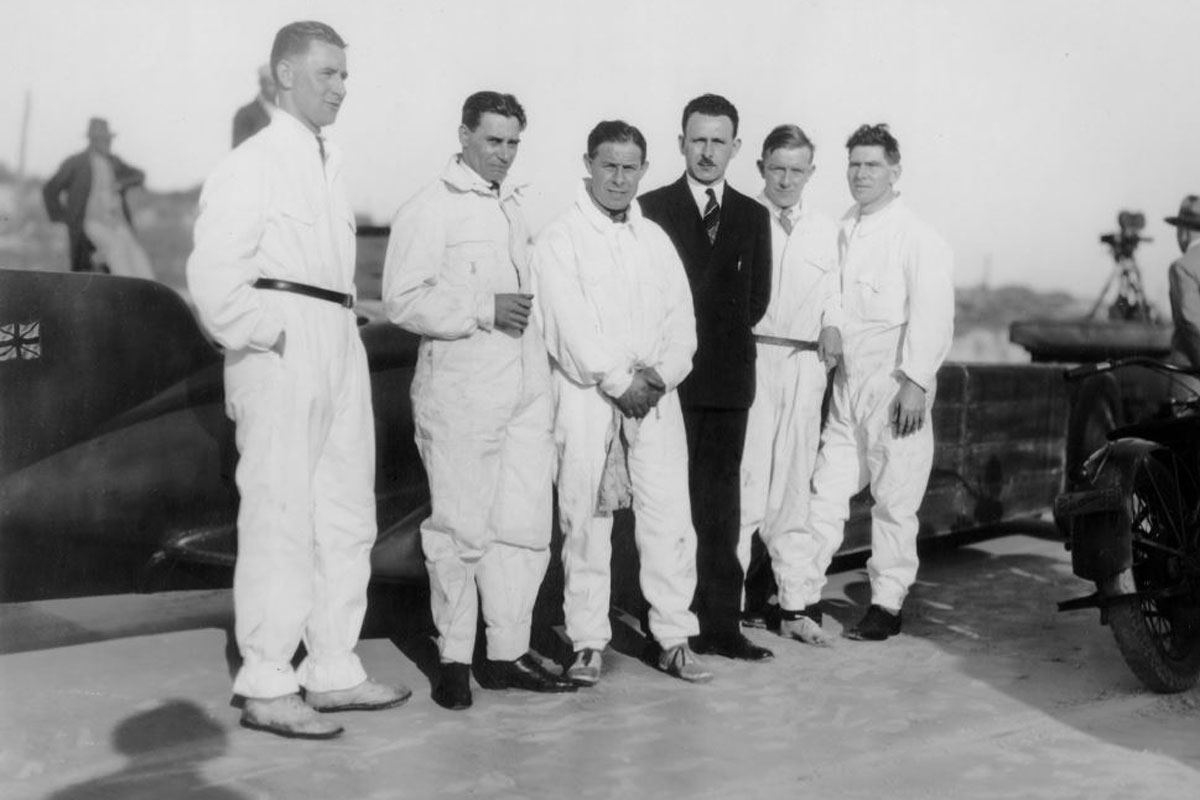 Whilst it is not yet possible to identify most of the men individually, research shows that Macdonald, Calvert, Peach and Baguley were present at Daytona Beach in 1929. The suited gentleman is likely William Percival Calvert.

W.P. Calvert was one of the mechanics who maintained Golden Arrow’s Napier engine during its record attempt at Daytona. This information was gleaned from Ancestry records which show that Calvert left from Southampton on the HMS Majestic, the same ship Segrave sailed on.

Calvert was an experienced aeroplane engineer, learning his trade in the First World War through his service in the Royal Flying Corps when he was 19 years old. Later, he was employed by D. Napier & Sons to inspect aeroplane engines, this job took him as far as South America. He returned in September 1928 before leaving on the 8th of February 1929 for New York with Sir Henry Segrave.

After the success of Golden Arrow, Calvert returned to his career as a travelling aeroplane engineer, with his career yet again taking him to South America in 1954, aged 57. By 1958, Calvert settled in New South Wales in Australia, where he lived out the rest of his life until his death in 1970, aged 73.

For the men below, our research enquiries are ongoing.

Ernie Lavender had previously collaborated with Segrave on the 1000 horsepower Sunbeam Car in 1927. Lavender’s name also appears on multiple newspaper records in relation to Golden Arrow.

David ‘Dunlop Mac’ MacDonald was a tyre fitter who had assisted Segrave during his 1927 land speed record run with Sunbeam. David also had an older brother, known as ‘Big Mac’. Literature suggests that David Macdonald was present with Segrave during Golden Arrow’s speed record.

Harold Irving was the chief mechanic present at Daytona in 1929. He was the brother of Captain John Samuel Irving, the designer of Golden Arrow. Upon returning to Liverpool from Florida, Harold Irving triumphantly declared that Golden Arrow could be “capable of doing 240 miles per hour, given good conditions.”

Research suggests that Baguley was another Dunlop tyre fitter, whilst little is known about Peach. Enquiries are ongoing for both mechanics.

To continue building upon our understanding of the men behind Golden Arrow, we will continue to explore and reveal the lives of these mechanics and engineers through utilising Ancestry and other digital archives. Further findings will be shared on Twitter and later through the National Motor Museum.

4 thoughts on “Exploring the mechanics behind Golden Arrow”