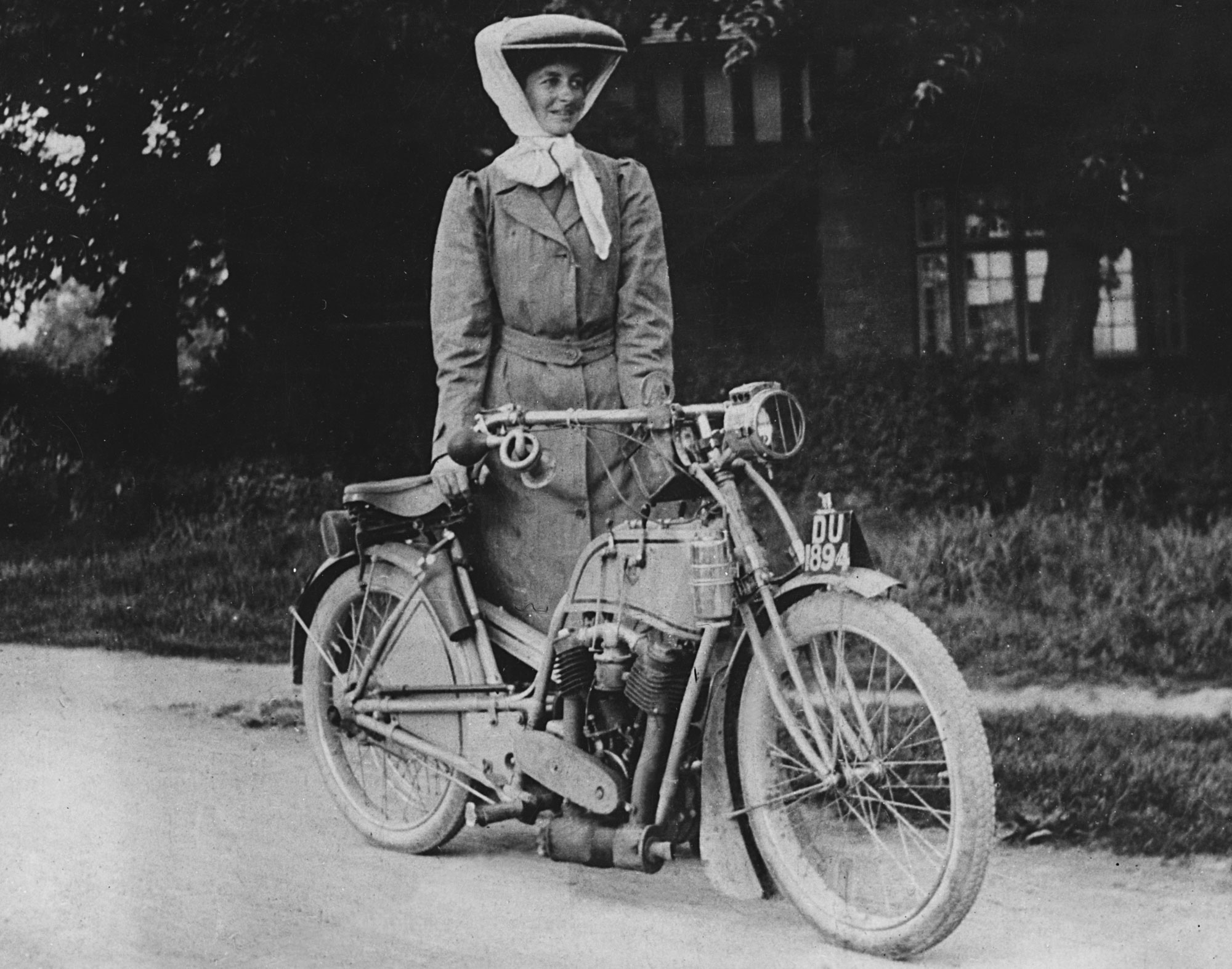 One doesn’t need to spend long looking through the Edwardian motorcycling magazines held in the National Motor Museum’s reference library to find references to pioneering lady motorcyclists. Although their activities may well have been frowned upon at the time, the press seemed keen to publicise their achievements and some took to the printed word to encourage other women to join them. One such prolific competitor and writer was Muriel Hind.

Born in Dorset in 1882, Muriel Hind was orphaned at seven years of age and brought up by relatives in Swanage. Like many of her generation she became involved in the bicycle craze of the 1890s before following both her uncle (himself a pioneering early motorcyclist) and brother’s example, becoming a motorcycle owner in 1903. Her first machine was a Singer; a dropped frame bicycle fitted with a 2hp Motor Wheel, a design originally developed by Edwin Perks and Frank Birch of Coventry and subsequently manufactured by Singer (an example may be found on display in the motorcycle gallery of the National Motor Museum). 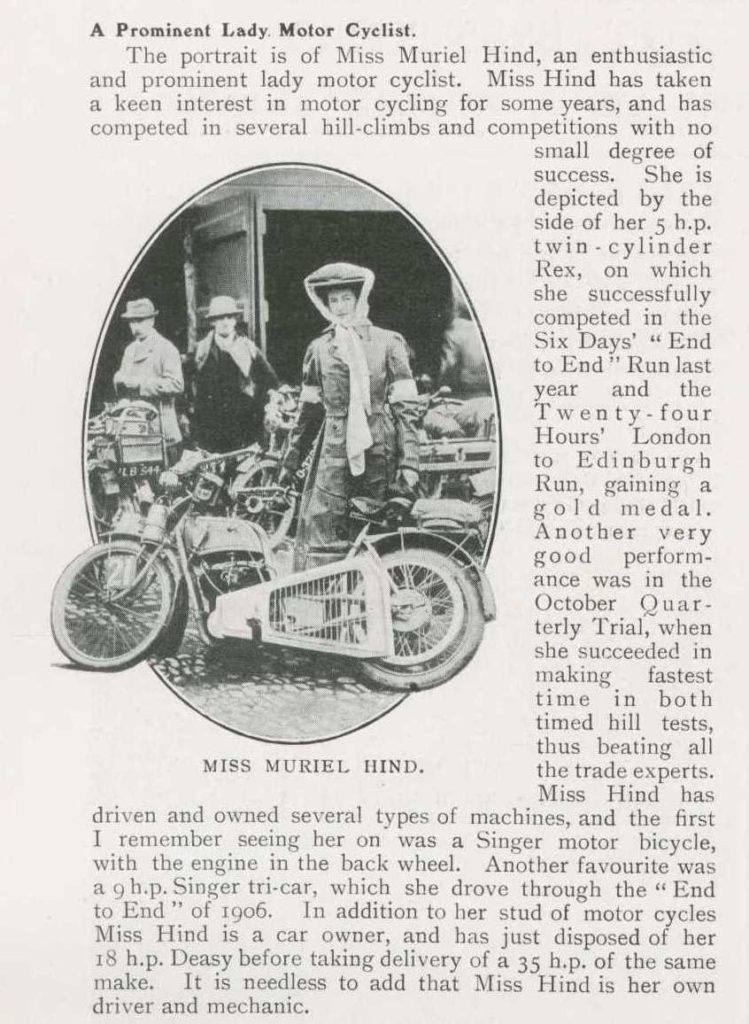 Hind moved to Coventry and, now situated close to the very heart of the rapidly expanding motor industry, became more involved in motorcycling and motoring. She began competing in trials and hill-climb events in 1905, starting an association with the Rex Motor Manufacturing Co, one of a number of motorcycle makers keen to exploit a growing market for lady’s motorcycles. She appeared regularly in the motorcycle press, usually in an action shot or posed with her latest machine. From 1910 she contributed a regular column, ‘The Lady Motorcyclist’, to the weekly magazine ‘Motorcycling’. In her first piece, published in the issue dated 2nd May, she extolled the pleasures of motorcycling thus:

“I like the feeling of power, life, the mighty rushing wind beating on one’s cheeks with the roar of the passing breeze and the beat of the exhaust deafening one’s ear. This is the power that drives and here is the motorcycle’s charm. But I am waxing too garrulous and must throttle down to legal limit or else the Editor will extend a warning hand and bid me stop.”

The column became a regular feature, as she reported on 25th October that year:

“Now that more ladies are taking up motorcycling, and either viewing the pastime from the seat of a passenger machine or actively participating in it on a lady’s motor-bicycle, we are to be given a regular page once a fortnight.” 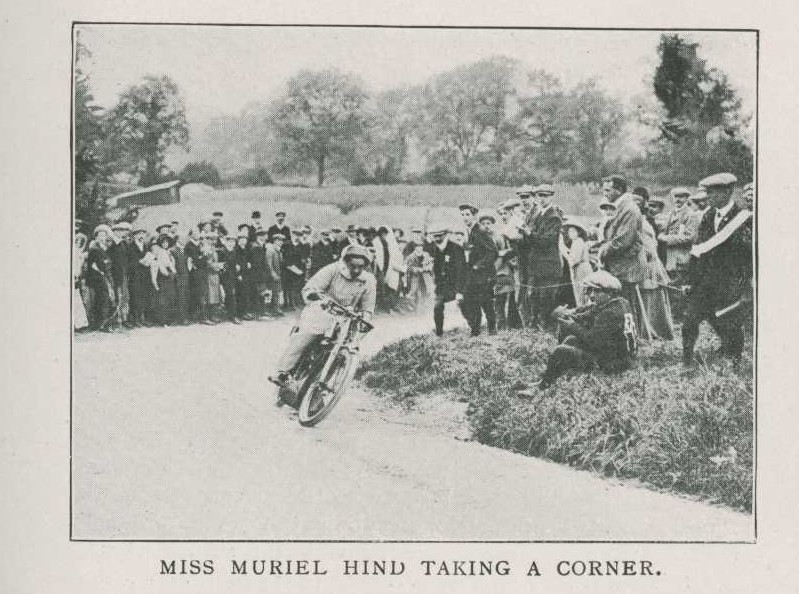 Her work with Rex led to her meeting and working with Dick Lord, an employee of the company and a rider of Rex motorcycles in the Isle of Man TT races in 1909, 1910 and 1911 (although he retired from the Senior race in each year). They were married in 1912, after which they both gave up competing although Muriel continued writing and promoting motorcycling for some time after.

Although synonymous with motorcycling, Muriel Hind was also active on three and four wheels. As reported in Car Illustrated of 21st April 1909, her other vehicles included “a 9hp singer tri-car, which she drove in the End to End [Land’s End to John O’Groats] of 1906” and “in addition to her stud of motorcycles Miss Hind is a car owner, and has just disposed of her 18hp Deasy before taking delivery of a 35hp of the same make. It is needless to add that Miss Hind is her own driver and mechanic.”

Discover more from our The Drive for Change project, exploring the connection between motoring and the suffrage movement, and the emancipation of women in the broader context