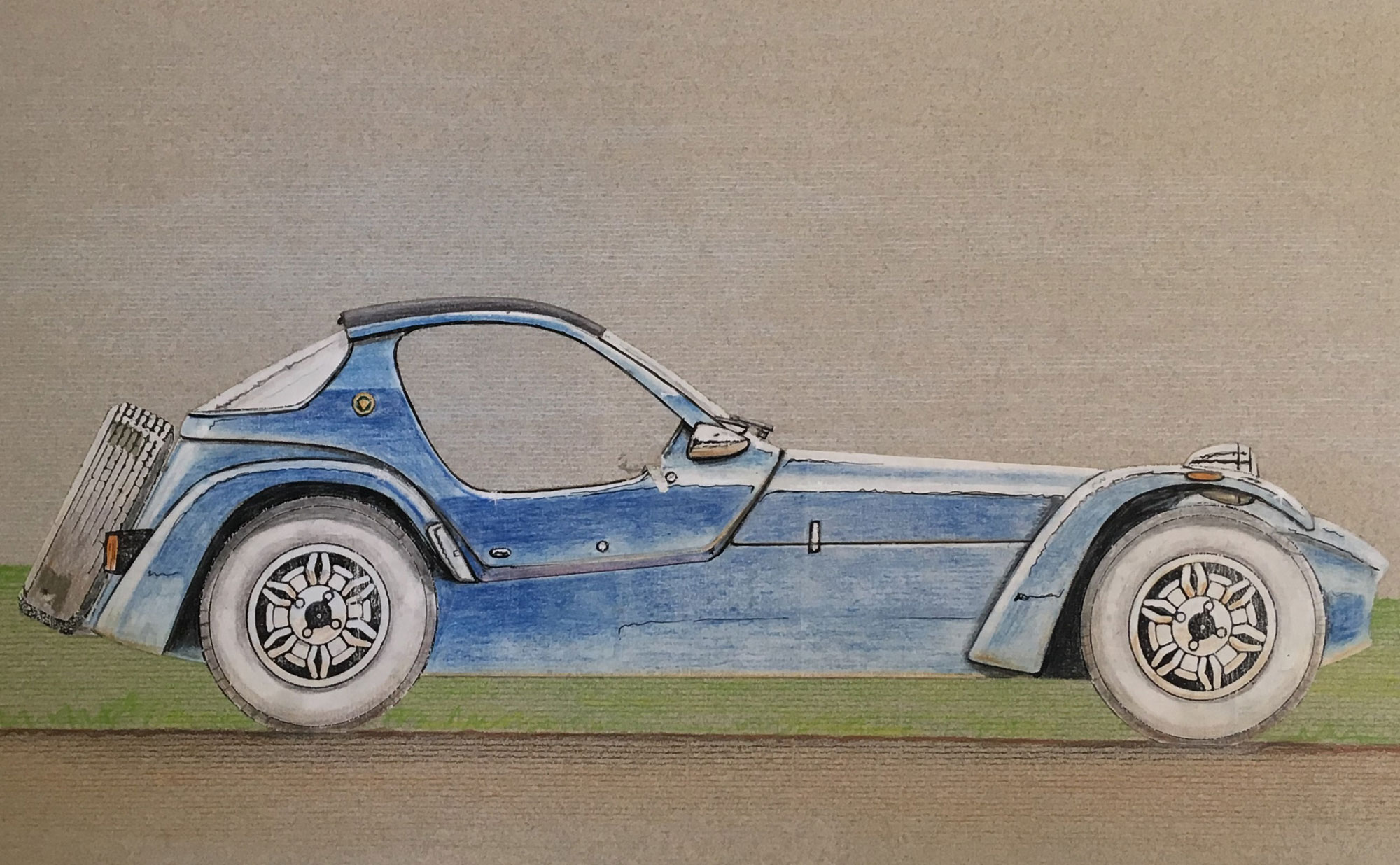 Sarah Wyatt, Senior Curator, explores the story of one of the most enduring Lotus vehicle designs, the Lotus Seven. Launched in 1957, the car was designed by Colin Chapman as “an affordable sports-racer”.1 The Seven was intended to be used both on the road and on the track. 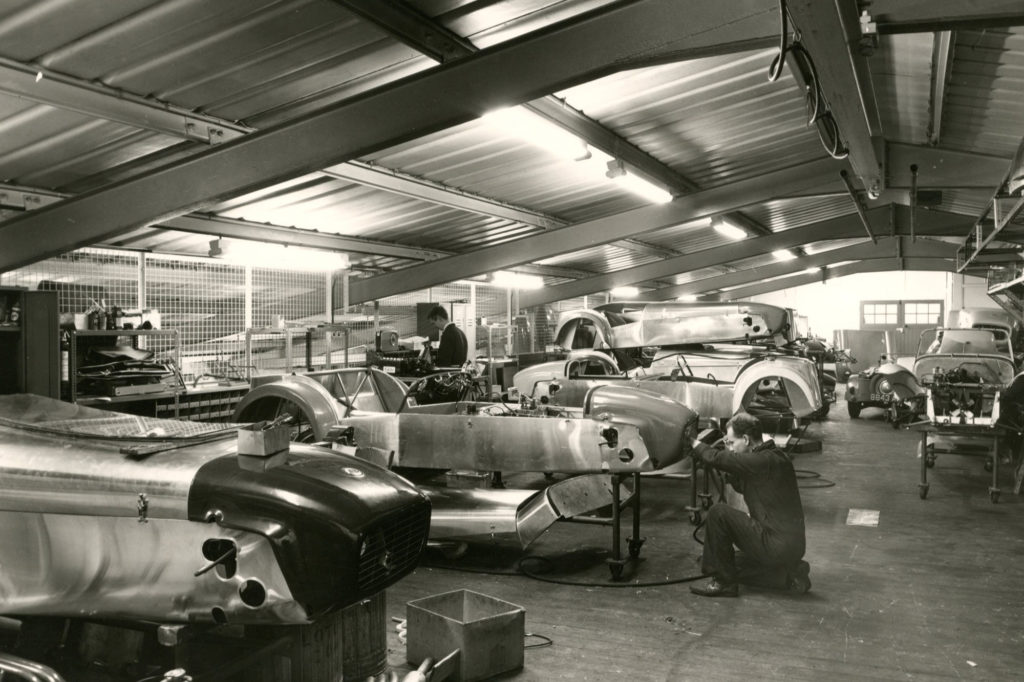 Adhering to the Lotus principals of lightness and simplicity, the Seven was constructed of lightweight steel with aluminium bodywork, weighing in at just 329kg. It was initially priced at £1,036 including purchase tax for completed cars, reducing to £536 in kit form. Lotus promoted its ease of construction for kit buyers, although:

Instrumentation was basic. In the absence of a fuel gauge, petrol levels had to be assessed by “peering inside the tank”.3 The Seven only had a windscreen with no doors, rear or side windows. Rudimentary weather protection was offered with a detachable vinyl hood. Access to the car was notably difficult with the hood attached:

Extracting oneself from a Seven with the hood on provides a huge source of mirth for the casual onlooker.4 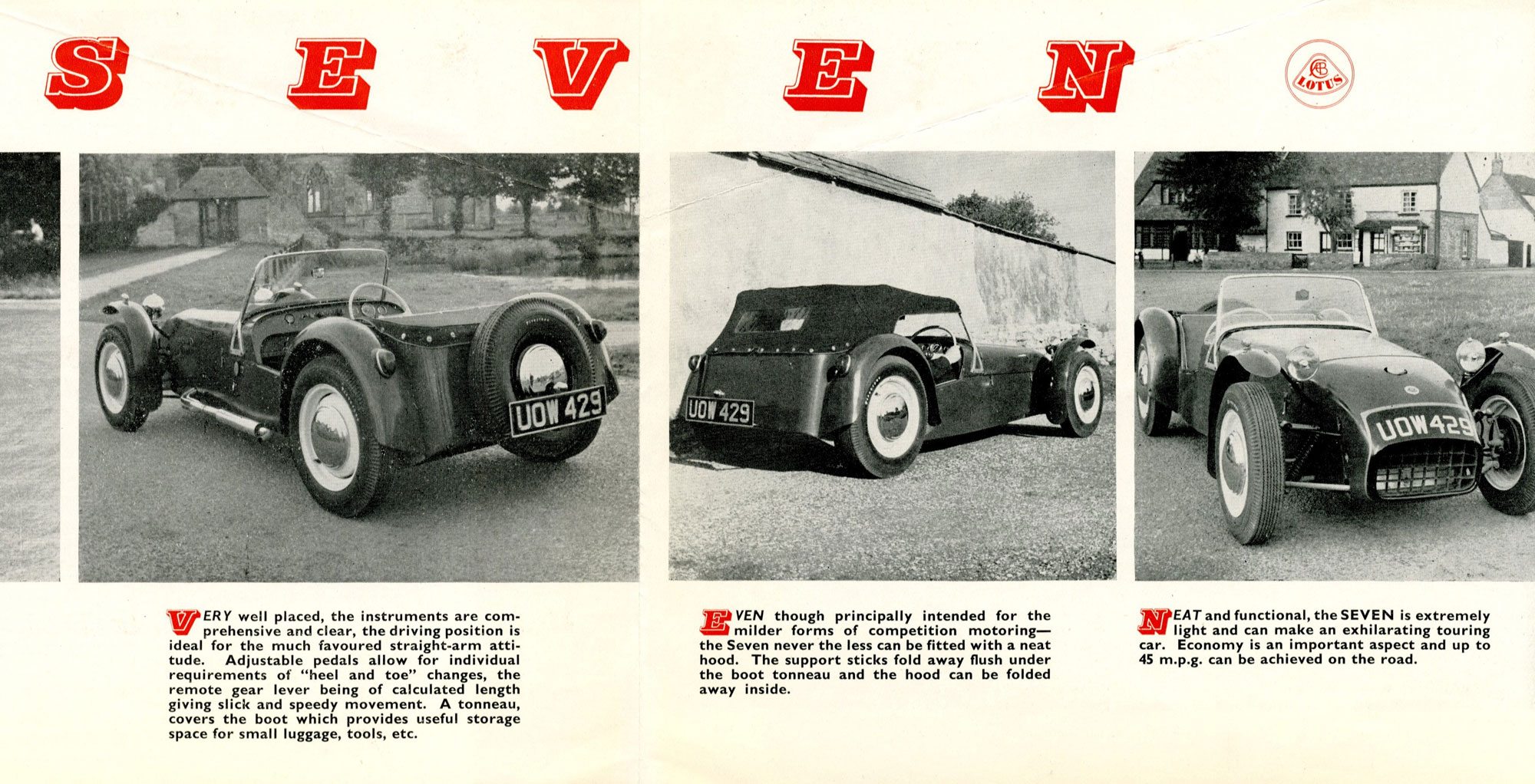 The Lotus Seven was a popular buy, with 2,500 of the original models sold. Steady production of the vehicle kept the company going as it developed more refined models such as the Elan. Eventually, in 1972, with the Seven on Series 4, Lotus decided to cease production and to sell the rights to long-standing sales agent Caterham Cars. 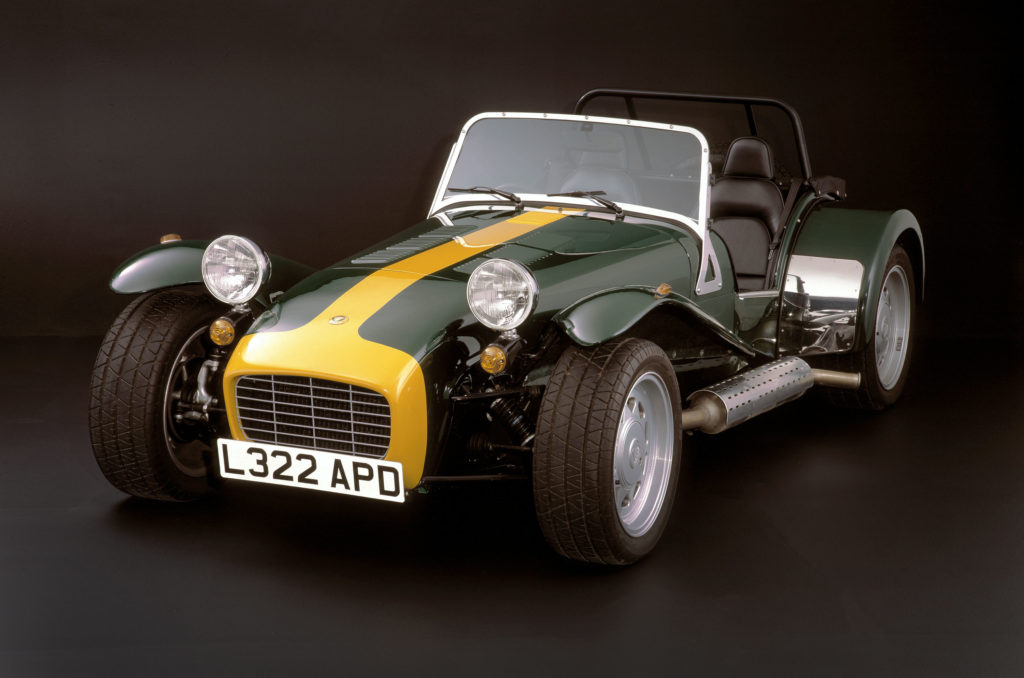 Caterham initially used the remaining stock of Series 4 Lotus Sevens but once depleted, switched back to the Series 3 design. The latter were much more closely aligned to the original Lotus 7 concept, as the Series 4 had moved onto fibreglass body panels and a more luxurious specification.

The Lotus Seven spawned many replicas, with over 150 companies producing “Seven-types”. Its iconic status was also strengthened by it being selected by Patrick McGoohan to be driven by him in the opening credits of cult television series ‘The Prisoner’ (1967-1968).

The Caterham Seven is still in production today, with annual European sales around 90-150. 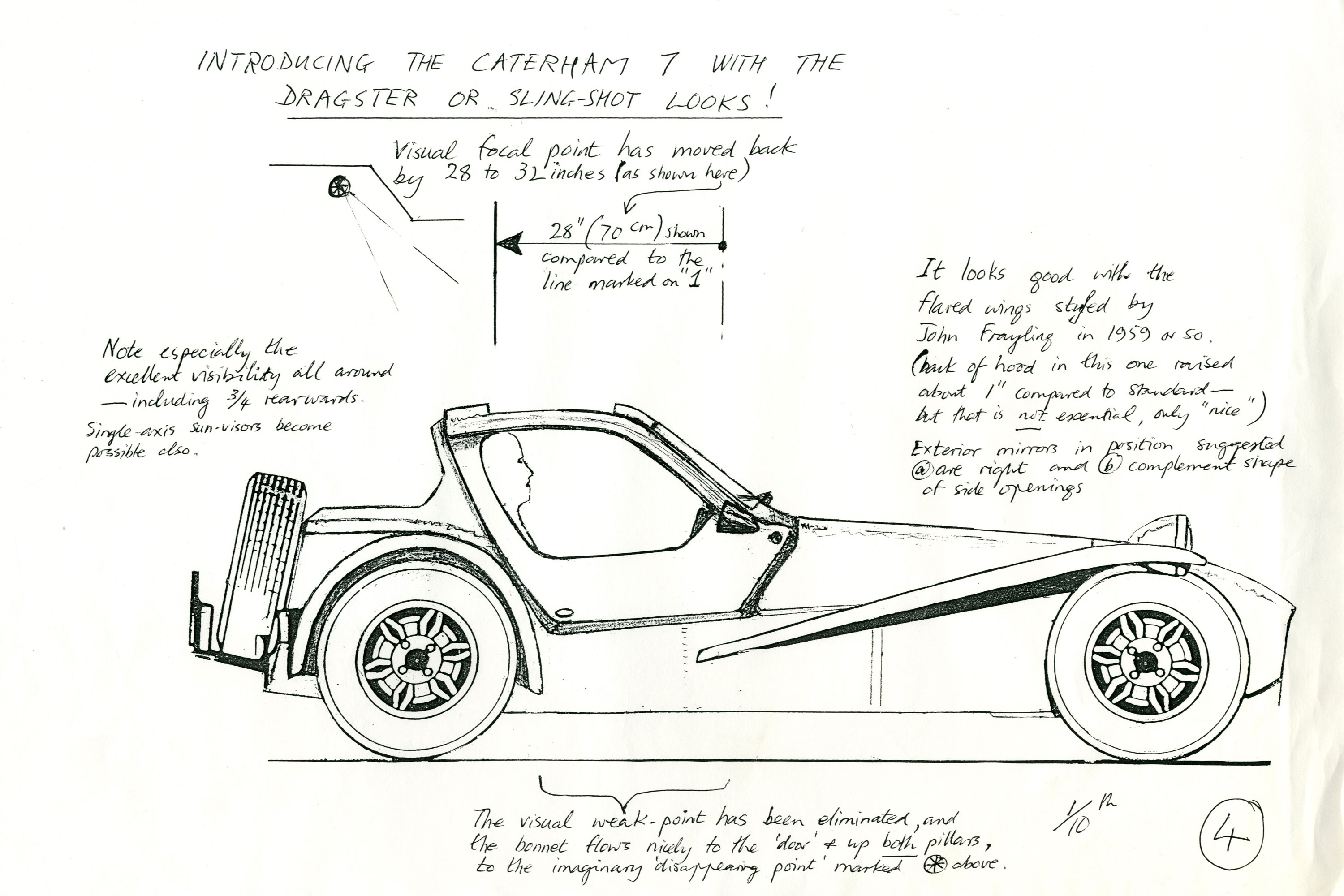 In 1994, Ron Hickman decided to design a more driver-friendly replacement to the traditional vinyl hood for the Caterham Seven. He wanted to solve the issues of comfort, visibility and access that were experienced by owners opting for weather protection. Hickman of course also took the opportunity to give the whole car a sleeker ‘dragster’ look. Hickman’s solution was a flip-top roof. His detailed designs show the canopy hinging at the front, aircraft-style, allowing ‘step-in’ access. His design notes say the canopy:

Goes from fresh-air, to half enclosed, to fully-enclosed form in three quick and easy stages – thus making it a highly practical fun machine for fair or foul weather commuting and touring; a second rather than third car! 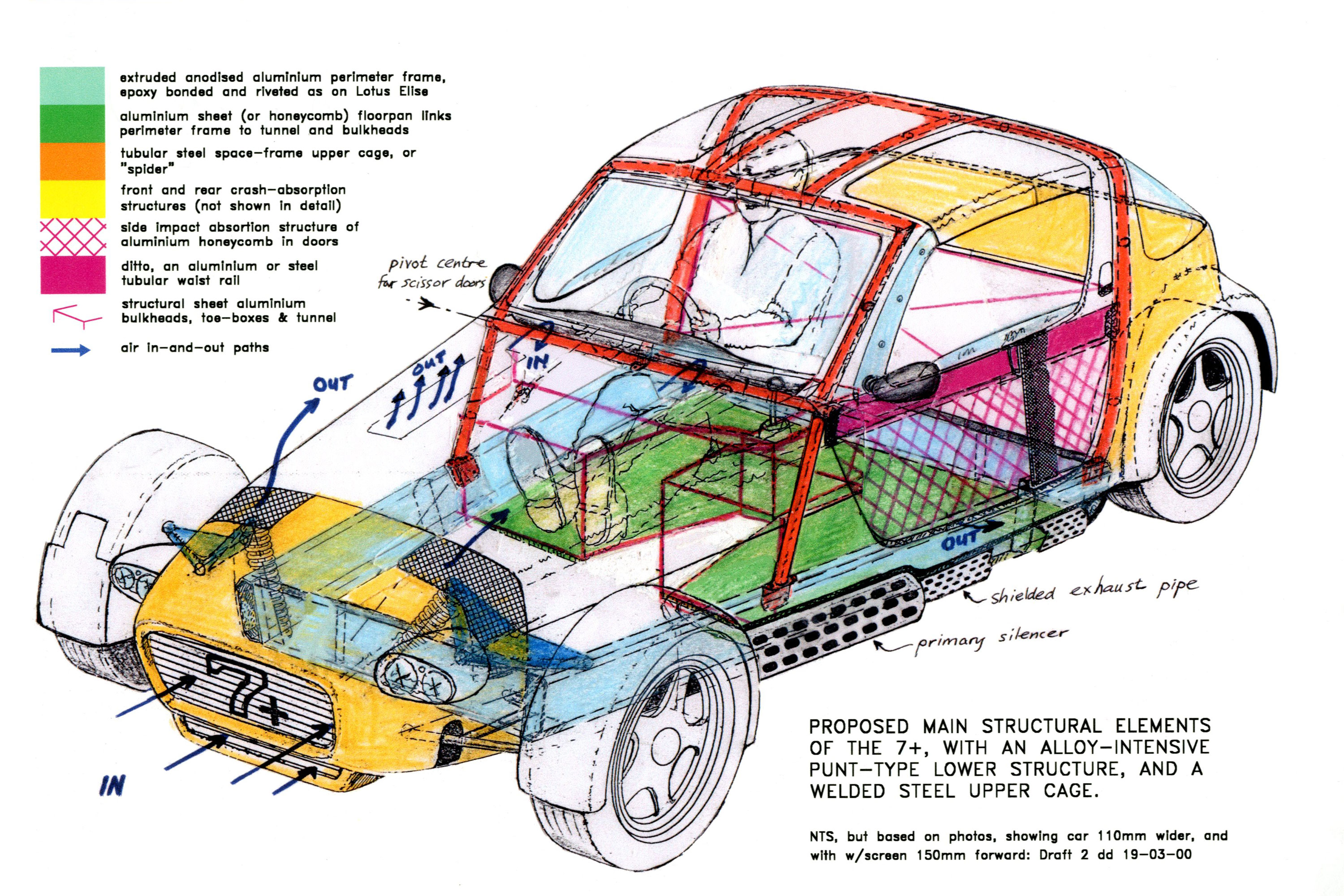 A later design, dated 2000, shows that Ron Hickman refined his revisions to make what he terms a “7+”, with a wider, lower car benefitting from a welded steel upper cage.

Ron Hickman’s personal archive has many intriguing design proposals, from an Anglia sports car to a fibreglass “uni-table”. Our Ron Hickman blogs will continue to explore this wealth of creativity.