David Cooper – Clerk of Works for the Beaulieu Estate

My father is a great car enthusiast and took me to see the cars in the car park of Wembley Stadium back in 1970. The 1966 World Cup had inspired our hopes of another footballing victory and such events as The World Cup Rally from London to Mexico sponsored by The Daily Mirror newspaper.

At Wembley the cars were parked in the car park prior to going into the stadium for the start and the general public were allowed to walk around them. Over one hundred cars started and ‘Puff the magic wagon’ was number 20. The amazing cross section of entries included two Rolls Royces, a Beach Buggy and of course the Ford Escort ‘Mexico’ winner. 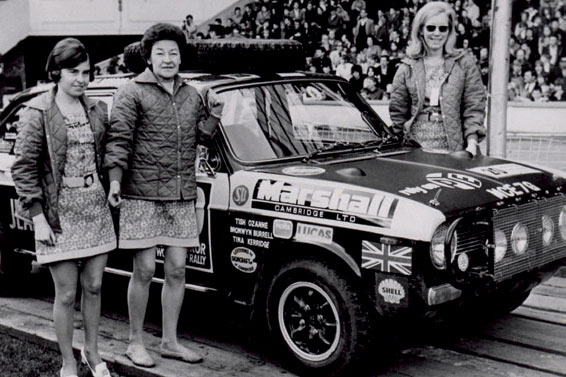 Puff was a blue Austin Maxi originally fitted with only a 1450cc engine and often prone to running out of puff on such a demanding event. The car now features a larger 1750cc engine, with better gear linkage, but is otherwise very original. It was marvelous to view Puff in the foyer of the Collections Centre and take in the detail of such an historic rally car.

The Speed Queens evening recaptured the scene with Bron and Tina from the original rally team and the inside story of how they fared. We were treated to  share their plans to continue to rally with Puff in future events and maybe even get to Mexico.

It was a super evening with the iconic car, the inspiring ladies with their great rallying story, told in comfortable surroundings and amongst friends of classic motoring.