As part of  The Drive For Change project celebrating 100 years of women’s suffrage, we have been exploring the story of the Ladies’ Automobile Club.

At the the turn of the century, some of Britain’s prominent society women began to feel that they needed a club in which to share their interest in motoring, as the existing automobile clubs did not admit women. The Ladies Automobile Club was founded in 1903, with Lady Cecil Scott Montagu as a driving force behind its inauguration. The list of the first fifty members includes 23 titled ladies, so this was very much an organisation for the moneyed elite. The Autocar reported on the formation of the Club in June 1904:

Ladies have long felt that they could not leave such as fascinating pastime as automobilism to be enjoyed by the sterner sex alone. Many ladies who own cars now drive them with grace and skill, and these fair motorists soon found the necessity for forming a club, which is now a flourishing institution daily increasing in numbers¹

The Club’s aims were both social and technical, so as well as providing premises to meet in, technical information was to be provided to all members as well as the organisation of tours and competitions, and instruction in driving “to members and servants of members”.2 The annual subscription fee was set at two guineas.

In 1904, The Duchess of Sutherland became the first elected president of the Club. Rooms for the Club were initially located within the Hans Crescent Hotel in Piccadilly but after six months they moved into more spacious accommodation at Claridge’s Hotel in Mayfair. Members could also leave their cars at the nearby Harrods Garage for a fee of 10 shillings a week. 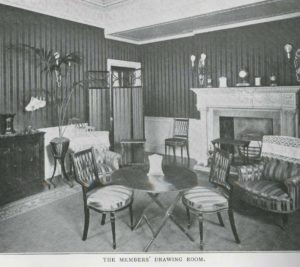 A column in The Autocar magazine in 1905 describes an invitation “the Autocrat” took up to attend a lecture at the Club headquarters:

My hostesses the ladies have really the most dainty headquarters at Claridge’s, with their own entrance and many other conveniences. After the lecture, tea was taken in the Great Hall, and automobile conversation was rife the while. I was gratified to hear much technique from feminine lips, which goes only to show that woman, when really interested, is twice as thorough as man.3

The Club was to organise many motoring-themed lectures including, notably, one by Charles Rolls entitled ‘Historical Reminiscences and Roadside Experiences’, which he summarised as follows: 4 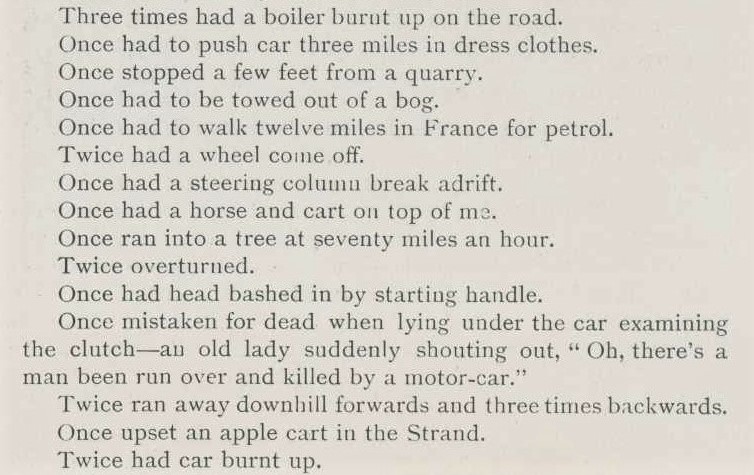 Other lectures included ‘Hints on Motor-car Driving’ by Lord Montagu in 1907 and a 1913 talk by Filson Young on ‘Motors and Morals’, described as “a gloomy affair” in The Autocar magazine. 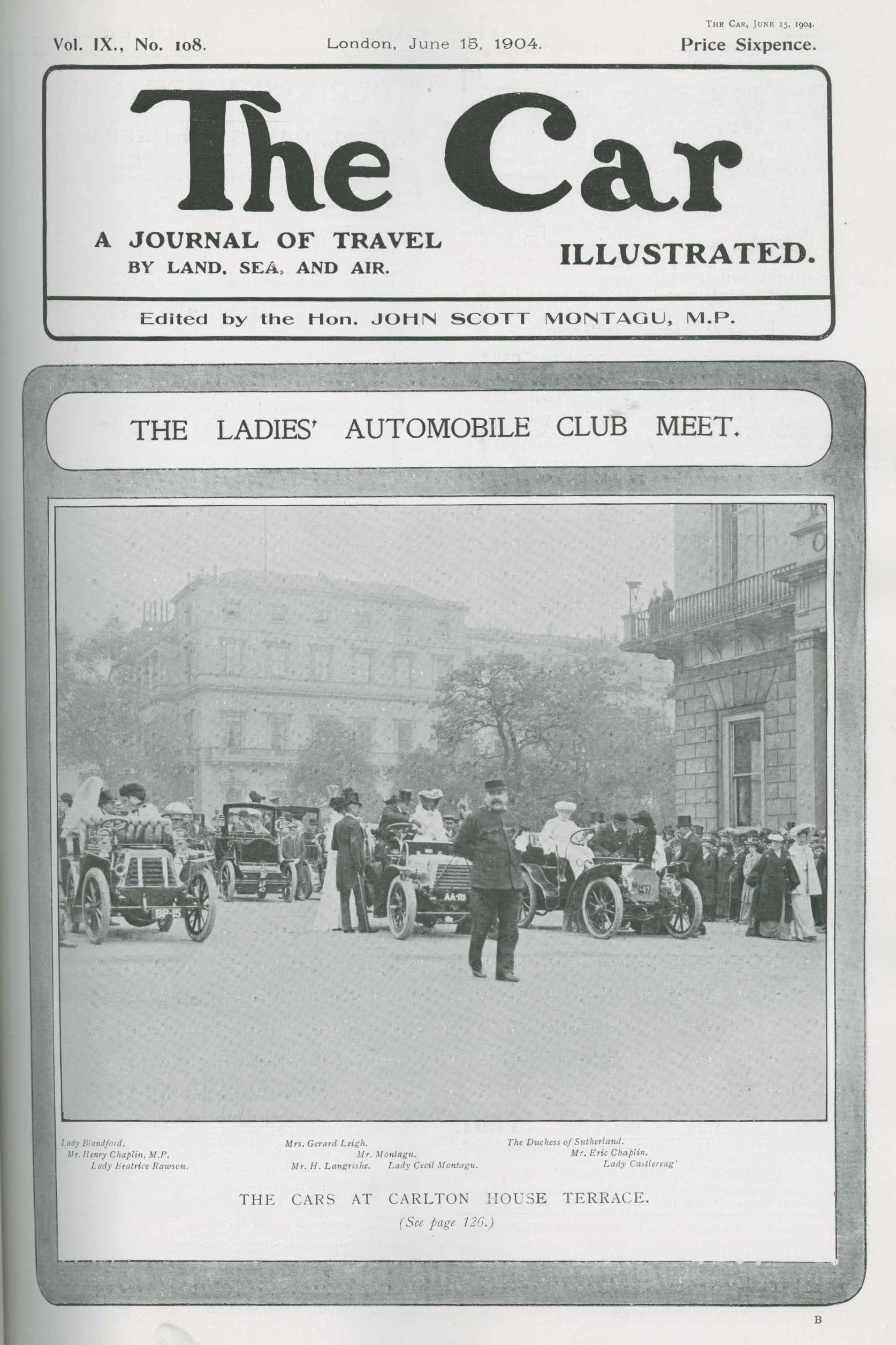 The first outdoor Club event was held on 15 June 1904 in London and was featured on the front cover of motoring journal, The Car Illustrated. Some 56 vehicles assembled at the Athenaeum Club in Mayfair and progressed along Pall Mall to Hyde Park, finishing for tea at the Ranelagh Club in Barn Elms. So striking was the spectacle of so many women driving en masse in both petrol and electric cars (as well as one steam wagon) that the King and Queen watched them go past from a window in Buckingham Palace. Press coverage of the event tended to focus on the femininity of the participants rather than their driving prowess:

No unsightly goggles nor hideous masks marred the beauty of London’s fairest daughters: bright dresses and pretty hats were the order of the day.5

Further events were organised, often involving a massed drive out to one of the members’ estate or to a country club such as Hurlingham. Motoring gymkhanas were also enjoyed with events such as a ‘crawling race’ where competitors had to drive as slowly as possible without the use of the clutch or brake and without stalling the engine. Another exciting event at the gymkhana was a ‘bomb race’ where competitors had a ‘bomb’ thrown in front of the car at random stages of the race, which had to be retrieved by the driver, driven and handed over to a ‘policeman’ at the end of the course, before then finishing the rest of the quarter mile race. The 1906 Ranelagh Gymkhana even included a ‘police-trap race’ where the competitors had to complete a circuit of the course at a speed predetermined by the organisers. The person closest to the speed overall was the winner, which as speedometers had only just started to be developed for cars, made this quite a challenge. 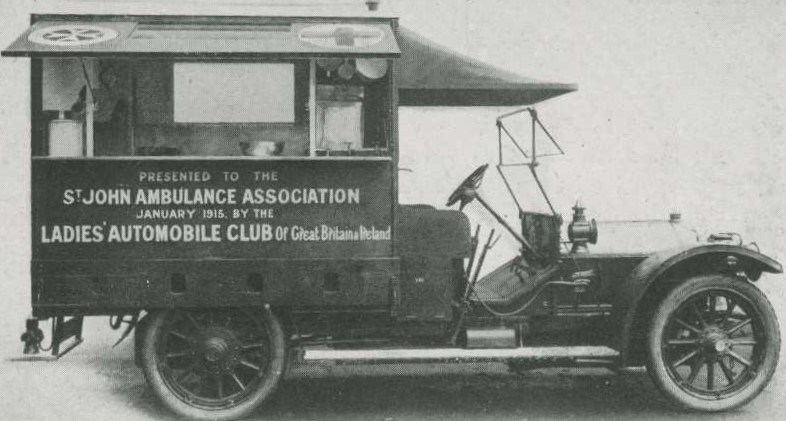 As the funds of the Ladies Automobile Club accumulated, they began to look towards more philanthropic activities. ‘Editorial  Jottings’ in The Car magazine in 19126 praises the Club for its decision to endow a hospital bed at the Royal Free Hospital in London specifically for those injured in accidents caused by motor vehicles. The editor urges the AA and the RAC to follow suit. During the First World War, in January 1915, the Club funded a motor field kitchen with specially designed coachwork on a 40hp Crossley body.

Whilst the Club certainly reflected the elite of society, motoring was after all a rich person’s hobby in its early days, it was a significant move towards recognising and organising women as motorists in their own right for the first time.

4 thoughts on “The Ladies’ Automobile Club”