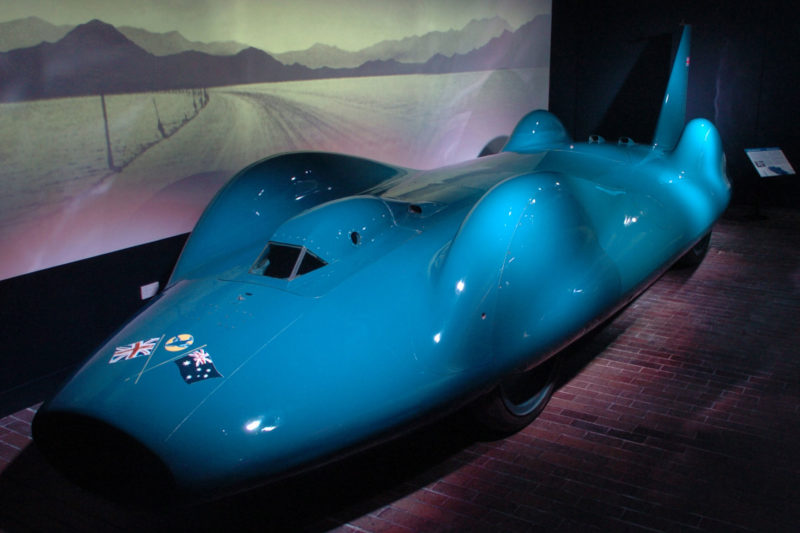 The first car to (officially) set a Land Speed Record in excess of 400mph and the last to be wheel driven, Bluebird CN7 was one of a long line of speed machines associated with the Campbell family.

Donald Campbell already held the Water Speed Record. His goal was 400mph on land. Technical support and backing came from British industry. Designed by Ken and Lew Norris, Bluebird CN7 was powered by a Bristol-Siddeley Proteus gas turbine engine, as used in airliners, driving all four wheels. It was a massive and expensive project, costing an estimated £1,000,000 to build.

A first record attempt at Bonneville in 1960 met with disaster when Bluebird, caught by a gust of wind, veered off course and somersaulted. Campbell escaped with minor injuries but the car was virtually destroyed. The project was revived and Bluebird rebuilt, this time with a distinctive high tail to aid stability. A new venue was found at Lake Eyre in South Australia. Bad weather meant that record attempts in 1962 and 1963 had to be abandoned. Eventually, despite mechanical problems and unpredictable weather, on 17th July 1964 a speed of 403.10mph was attained.

Campbell’s record was short-lived. Rule changes meant jet-propelled cars were now accepted. By the end of 1964, the record had been broken five times and was 133mph faster.

No, it was awful, the car slewed all over the track

Donald Campbell, Motor, July 25th 1964 on being asked if he’d enjoyed the first of the two record breaking runs in Bluebird.