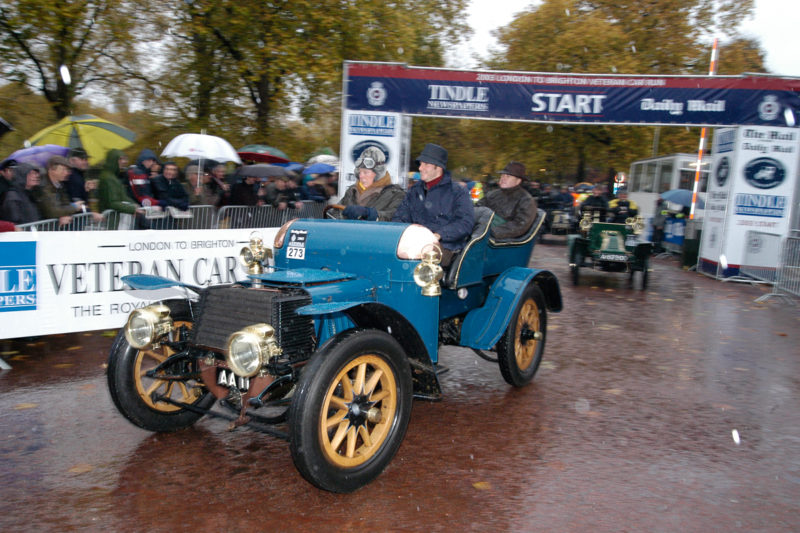 Each year, on the first Sunday in November, thousands of spectators line the main roads between London and Brighton to watch several hundred elderly motor vehicles take part in the World’s oldest motoring event, the London to Brighton Veteran Car Run. 2021 marks the 125th anniversary of the original run and celebrates one of the most important pieces of legislation in UK motoring history.

In the late 19th century there was a general mistrust of motorised road transport in Great Britain. The 1865 Locomotive Act (the ‘Red Flag Act’) required all non horse-drawn vehicles to be attended by a crew of three; two on the vehicle and one walking some sixty yards in front with a red flag as a warning to other road users. Maximum speed was restricted to 4mph in the country and 2mph in towns, not in itself a major problem whilst the legislation was still aimed at heavy steam road locomotives. The Highways & Locomotives (Amendment) Act of 1878 altered the requirements; the third person was now required to be just twenty yards in front and no longer needed to carry the red flag. The speed restrictions remained and vehicles were now also required to stop when passing horses.

From the mid 1880s onwards the first practical petrol-engined motor vehicles became available in Europe. The early efforts of engineers such as Karl Benz and Gottlieb Daimler soon gave birth to a fledgling motor industry in Germany which was soon followed by developments in France. In Britain the legal situation did little to encourage similar progress and motor car building was undertaken largely by a few individual engineers in small private workshops. Men such as Frederick William Bremmer, James D. Roots, John Henry Knight and Charles & Walter Santler were all developing their own motor vehicles by the mid 1890s. Others, such the Honourable Evelyn Ellis and Henry Hewetson, imported cars built on the continent.

By the end of 1895 there were probably some fourteen or fifteen motor cars in Britain. There were a number of cases where motorists were penalised for non-compliance with the Highways & Locomotives (Amendment) Act. Campaigning from supporters of the motor car led to the passing of the 1896 Light Locomotives on Highways Act (the so-called ‘Emancipation Act’) which effectively repealed the previous legislation. Cars were now permitted to travel at 14mph (although many local authorities stipulated 12mph) and there was no longer a requirement for anyone to walk in front.

The Act became law on the 14th November and to mark the occasion motoring entrepreneur, businessman and Motor Car Club founder Harry J. Lawson organised a celebratory ‘Emancipation Run’ from London to Brighton on that day. Some 58 entries were received although it is thought only thirty-three were actually present for the start. Steam and electrically powered vehicles took part as well as the petrol-engined machines. The majority of the electric cars had to complete the journey to Brighton by train; then as now the range of electric vehicles being limited by battery charge. It is believed that twenty-two of the entrants made it to Brighton. Among the notable motoring personalities that took part, as drivers or passengers, were Harry J. Lawson, Frederick Simms, Gottleib Daimler, Leon & Amedee Bollee and Edward Joel Pennington.

The Motor Car Club commemorated the event over the next few years with day trips from London to various locations. However, in 1927 the Daily Sketch newspaper sponsored a re-enactment of the 1896 London to Brighton run. This proved so popular that, with the exception of the war years, petrol rationing and the pandemic of 2020 it has been repeated every year since.

Vehicles built before 1st January 1905 are eligible, occasionally joined by younger invited guests. Entrants come from all over the world, with 500 or more vehicles regularly taking part. Cars from the National Motor Museum’s collection are regular participants.

Beaulieu and the National Motor Museum have had a long association with the London to Brighton run. In fact, that association pre-dates both the original Montagu Motor Museum of 1956 and the opening of Palace House to the public in 1952. The Museum’s 1903 De Dion Bouton has been at Beaulieu since 1913, taken into estate ownership as part payment of an outstanding debt. Having seen regular use as a works vehicle by the estate engineer Frank Wadley for many years it was eventually retired, ending up in the care of various staff and local residents. It was entered in both the 1930 and 1931 London to Brighton runs, driven by estate land agent Captain Widnell and Mr McEntee, tenant of the Montagu Arms. It has taken part many times since, one of a number of regular participants from the National Motor Museum’s collection. This year the Museum will be represented by the 1903 22hp Daimler.