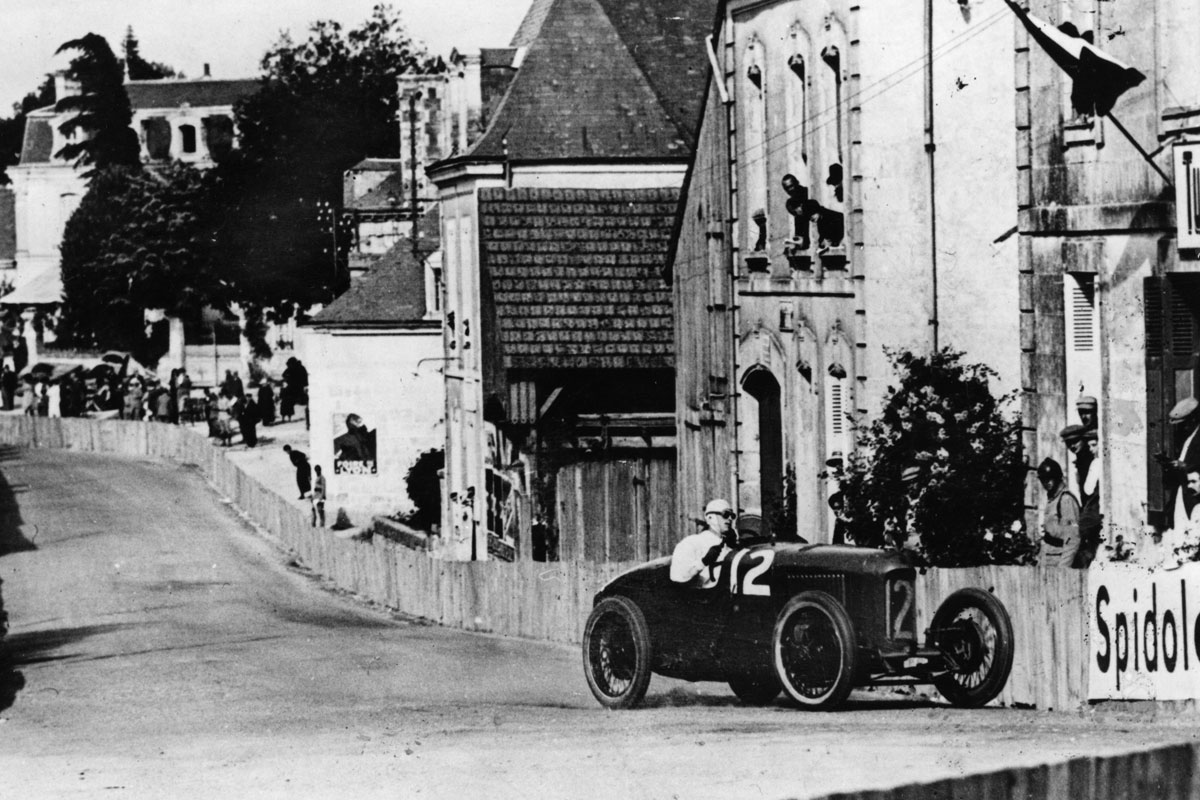 The 2nd July marks a significant date in the history of British motorsport. It was on that day in 1923 that Major Henry Segrave became the first British driver to win a Grand Prix motor race; not just any Grand Prix but The Grand Prix de la ACF at Tours in France. It was also the first time that a British car would win the race. Research and Enquiries Officer, Patrick Collins, takes a look at the story behind that famous victory and the far from straightforward race that took place that day.

1922 had been disappointing for the Sunbeam works racing team and for its great Chief Engineer Louis Coatalen. Despite successes elsewhere, they had failed to be competitive at the prestigious French Grand Prix at Strasbourg. Victory had gone to Felice Nazzaro at the wheel of the impressive new 2-litre, six-cylinder Fiat. In fact, Fiats and Bugattis were the only cars to finish the race. Coatalen knew that Sunbeam had to come up with something much better and managed to persuade Vicenzo Bertarione, one of Fiat’s top engineers, to abandon Turin in favour of Wolverhampton to help develop a car for 1923.

The result was a new six-cylinder engine, very similar to those used by Fiat. The first engine was running in April 1923 and testing of the car started in May, in plenty of time to have the team ready for the Grand Prix in early July. The drivers for 1923 would again include Henry Segrave and Kenelm Lee Guinness, this time joined by the French driver Albert Divo. Segrave in particular made meticulous preparations for the race, spending as much time as possible out on the 14.18 mile road circuit with his riding mechanic Paul Dutoit, practicing difficult corners and timing the opposition. In his autobiography, Segrave remembered,

I used to go down to the course and systematically clock other drivers on their corner work, analysing the results, and comparing them with my own times”.

It was all looking very encouraging. Then the Fiat team arrived. Driven across the Alps from Italy, the Fiats were even more impressive than in 1922. The new eight cylinder engines were supercharged, the first use of such technology in Grand Prix racing. In practice, the Italian cars lapped at greater speeds than Sunbeam had managed, Petro Bordino recording a lap time of 9 minutes 54 seconds, 34 seconds faster than Segrave. It looked as if victory would be Fiat’s for the taking.

Seventeen cars lined up for the 8.00am rolling start on 2nd July. From the off Segrave found himself in sixth position, followed by teammate Divo. Bordino’s Fiat shot off at an impressive rate, clocked at 122mph at one point on the circuit, averaging 87mph, to take an early lead. For the first eight laps, Kenelm Lee Guinness managed to hold on to second place before inheriting the lead when the Fiat suddenly expired. Meanwhile, Segrave was struggling, a slipping clutch limiting his top speed and leading him to consider retiring from the race at one point.

I actually stopped the car half way through the race to consult with Dutoit whether it would be advisable to retire completely… Luckily, we decided to continue.

The remaining Fiats, driven by Enrico Giaccone and Carlo Salamano, swept into the lead when Guinness stopped for fuel on lap twelve, re-joining the contest only to drop behind Segrave as his clutch also began to slip.

The Fiat of Giaccone led for a few laps before breaking down with the same ailment as Bordino’s, the supercharger having sucked in sufficient dirt and gravel to stop the engine. Albert Divo’s Sunbeam inherited the lead for three laps before being passed by Salamano in the surviving Fiat. By now, Segrave was running in third but still struggling with the clutch. A loud audible crack alerted both Segrave and Dutoit that something must have broken.  On further investigation Dutoit discovered that a stop on the gearbox, designed to limit rearward movement of the clutch pedal, had snapped. Segrave suddenly found that he had regained full clutch control, later writing,

… the metal stop suddenly snapped off … and I had a car in considerably better condition than anyone else’s, because it had never been driven fast and the engine had not been over stressed.

He set about closing the considerable gap between himself and the leading pair of cars with renewed enthusiasm.

Segrave inherited second place when his teammate Divo entered the pits to refuel on lap 30. The unfortunate Frenchman and his mechanic Jules Moriceau somehow managed to jam their filler cap and lost some 18 minutes struggling to force it open. In the end, they returned to the fray running on the small reserve tank, visiting the pits to top up on every lap.

Mechanical issues continued to plague the Fiat team. Salamano’s car broke down two kilometres from the pits and, after wasting a considerable amount of time while his mechanic ran to fetch fuel, it was discovered, that his car had also suffered the same supercharger issues as his teammates. Two laps to go and Major Segrave now led the race, later remembering

… I shall never forget the thrill – topping a rise in the road at about 116mph, I saw, a few hundred yards away, on the right hand side of the road, a low red car.

Things were looking good for the rest of the Sunbeam team as well, with Divo and Guinness in second and third places.

Yet, the drama was still not over. Guinness, having nursed an ailing car for much of the race, now stalled allowing Ernest Friedrich’s tank-like Type 32 Bugatti to sweep past into third place.

For some reason there was no chequered flag for Segrave’s winning car as it crossed the line, but history had been made and a British driver, in a British car, had won the Grand Prix. His average speed over the 496.5 mile race was 75.3mph, in a time of 6 hours, 35 minutes, 19.6 seconds, an astounding figure when compared with modern races. There was jubilation in the Sunbeam pit as the Wolverhampton cars finished first, second and fourth with Friedrich’s Bugatti in third.

A couple of days later Segrave drove the winning car “in excellent condition after the race” back to London. He was greeted with great excitement all along his route, both in France and England. The car was displayed in Sunbeam’s London showroom, where its makers could proudly proclaim it the first British car to win the French Grand Prix. The feat would not be repeated until Australia’s Jack Brabham won the event in a Cooper in 1960.

Sir Henry Segrave is one of the true icons of the heroic age of speed; fighter pilot, racing driver, Land Speed Record holder and power boat racer. Two of his Land Speed Record cars, the 1927 1,000hp Sunbeam and the 1929 Irving Napier Special ‘Golden Arrow’ are on display in the National Motor Museum. The latter is the subject of an Arts Council England funded project, The Golden Arrow – Shot from the Past, Aimed at the Future, that will interpret and re-tell the inspiring stories behind this truly iconic machine and the people who were associated with it.