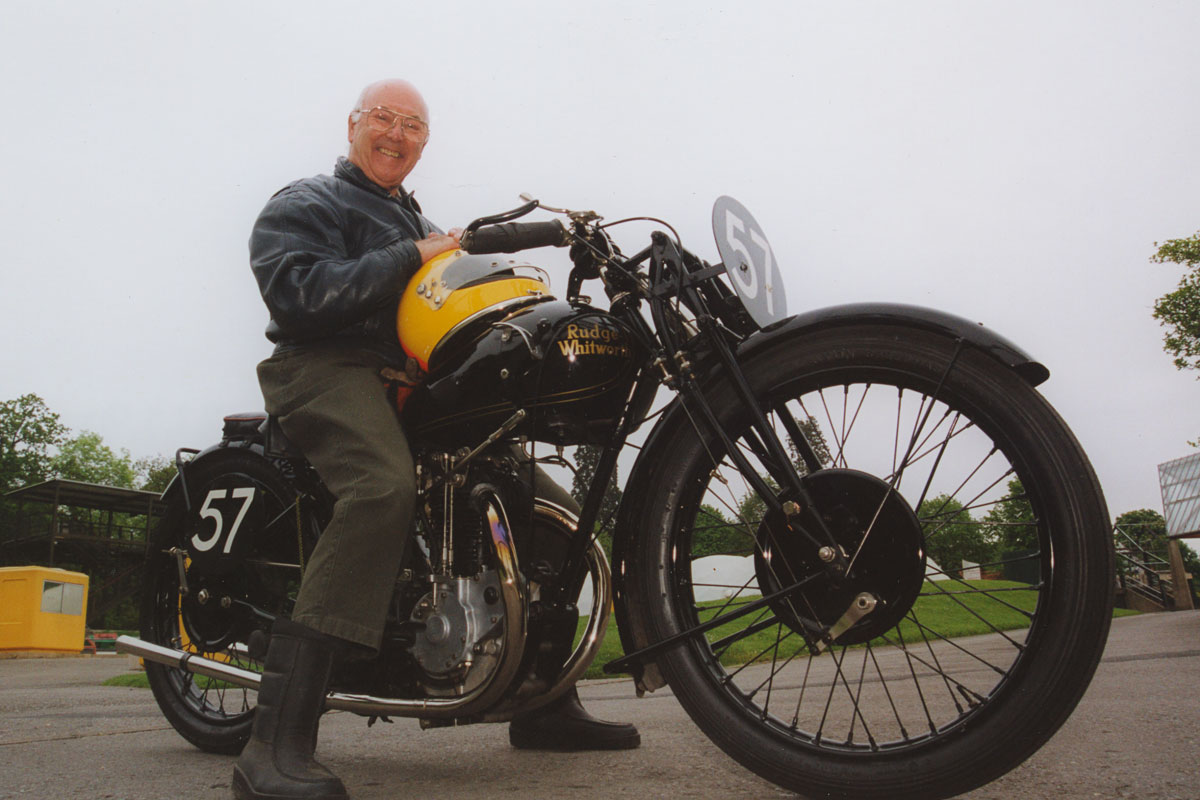 This week we were saddened, like so many motor sport fans, to learn of the passing of the much loved television motor racing commentator Murray Walker. Heralded by many as the ‘voice of Formula One’, Murray Walker’s name is as synonymous with motor racing as that of Brian Johnston with Cricket or Bill McLaren with Rugby Union. His connections with, and involvement in, motor sport predates his TV career by many years.

Murray Walker was the son of the well-known TT winning motorcyclist and journalist Graham Walker.  He spent his early years moving around the West Midlands, as his father successively worked and rode for Norton, Sunbeam and Rudge-Whitworth. During the Second World War Murray trained as a tank commander and rose to the rank of Captain in the Royal Scots Greys, seeing action in command of a Sherman tank.

In the years after the war, Murray briefly followed his father into motorcycle road racing. He also competed with some success in trials, including both the International Six Day Trial and Scottish Six Day Trial.

Murray pursued a successful career in advertising and over the years handled campaigns for many famous brands including Esso petrol, Mars confectionary and the Vauxhall Motor Company. He pursued this career in tandem with broadcasting until his retirement. He made his first motor sport commentary at Shelsley Walsh hill climb in 1948 and his first BBC radio broadcast came at the 1949 British Grand Prix at Silverstone. He regularly commented alongside his father at motorcycle events, including the Isle of Man TT, and became the BBC’s main motorcycle commentator after Graham’s death in 1962.

Murray’s long association with Beaulieu came about via his father’s involvement with the Montagu Motor Museum. In 1957, having recently retired from the editorship of Motorcycling Magazine, Graham Walker was approached by Lord Montagu to curate the motorcycle collection of the then recently opened Montagu Motor Museum. The National Motor Museum’s collections of motorcycle related materials are still full of items donated by Graham at that time and have been supplemented by further donations from Murray over the years. The Film and Video Collection also includes archive footage of Murray, some of which can be viewed on the National Motor Museum YouTube channel.

Murray’s commentating career covered much more than just Formula One. Over the years he could be heard describing the action and excitement of sports as diverse as moto cross, saloon car racing and Formula Three and he was just as familiar with circuits like Thruxton or Lydden Hill as he was with Monaco or Monza. Yet, it is for the many years at the microphone, as the ‘voice of Formula One’, for which he will be best remembered and for which he endeared himself to the British public.

Although Murray commentated on Formula One races for the BBC throughout the 1970s, it was in 1978 that he took on the role full time. In 1980 he was joined in the commentary box by 1976 World Champion James Hunt. After a stormy start to the relationship, the two entered into a long and successful partnership, which was only broken by Hunt’s untimely death due to a heart attack in 1993. Jonathan Palmer filled the void left by Hunt’s passing and later, following transfer of the F1 broadcasting rights to ITV, Martin Brundle would become Murray’s regular sparring partner.

The fact that ITV had to lure Murray away from the BBC after they obtained the broadcasting rights speaks volumes for just how intrinsic a part of the F1 scene he was. Over the years he became as respected and loved by successive generations of racing drivers as he was by the public. He formed close friendships with a number of great drivers. Many will remember the very obvious emotion in his voice when Damon Hill won the 1996 Drivers’ World Championship.

A big part of Murray Walker’s public appeal was his genuine love and enthusiasm for the sport. In a fast paced, dynamic sport like motor racing that enthusiasm occasionally bubbled over in the heat of the moment, resulting in one of his infamous mistakes or ‘Murrayisms’. These were always embraced with good humour by Murray himself and some of the more famous ones have been shown countless times over the years. His wonderfully readable 2002 autobiography, ‘Unless I’m very much mistaken’, took one of the most famous of these ‘Murrayisms’ as its title.

Murray’s last World Championship commentary came at the 2001 United States Grand Prix but even after retirement, his enthusiasm was undiminished and he continued to make regular appearances on television. Over the decades, Murray continued his long association with Beaulieu and his support for the National Motor Museum, often attending special occasions or hosting memorable Friends evenings. He opened the re-designed motorcycle gallery, named in his father’s honour, in 2014. He returned to Beaulieu a year later for the reopening of the Museum’s motorsport gallery, to which he had contributed narration for various interactive features.  On that day, he interviewed Sir Stirling Moss in front of assembled guests in the Museum’s lecture theatre. As ever, Murray’s passion for the sport shone through as the two old friends chatted.