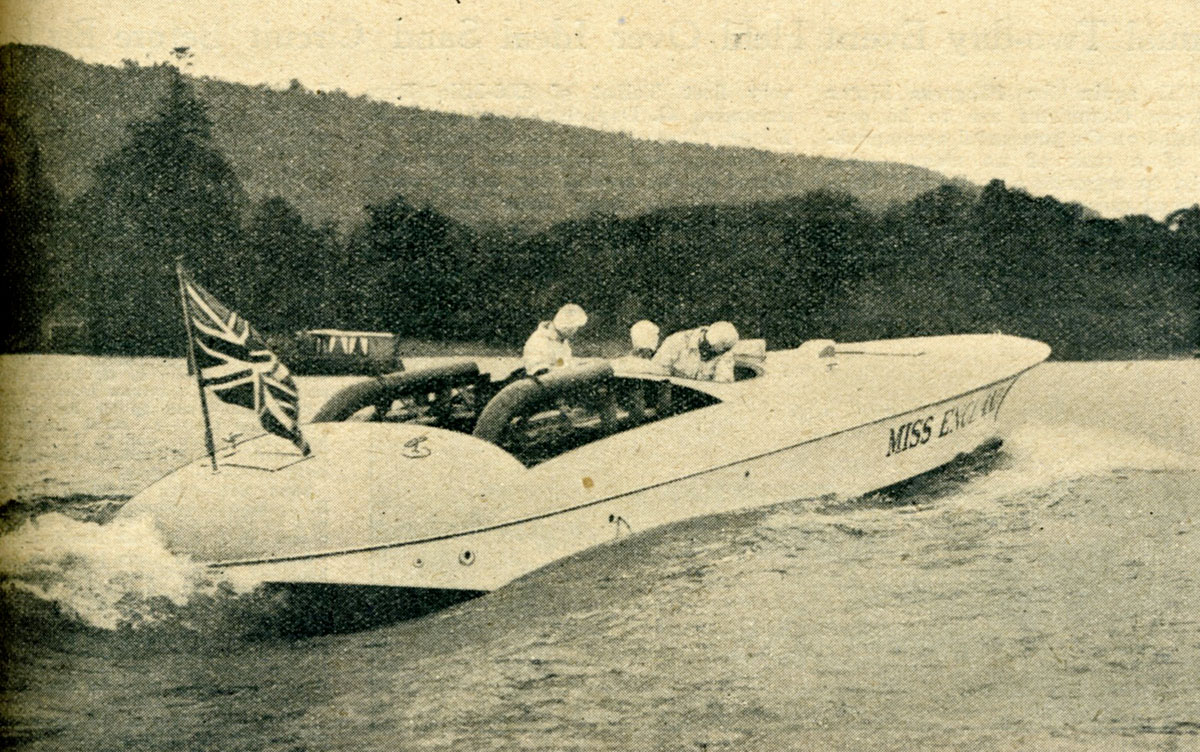 Major Henry Segrave had risen to stardom in the world of motor racing very rapidly. Obviously blessed with natural talent, his first victory came in only his second race, at Brooklands in 1920 and was able to secure a works drive for Sunbeam in 1921. Success at home and in Europe followed, notably as the first British driver to win a Grand Prix, at Tours in 1923. By the time of his second Land Speed Record (203mph in the 1,000hp Sunbeam at Daytona) in March 1927 Segrave was very much at the top of his game. Therefore it came as a complete shock to the motor racing world when, in April that year, he announced his decision to give up car racing and try his hand at motor boat racing instead.

Segrave’s natural abilities shone through on the water as they had on the track. A string of motor boating victories followed, including the German and European Championship titles in 1929 at the helm of Lord Wakefield’s Miss England. He even found time to break his third Land Speed Record with Golden Arrow in March that year. Land Speed Record secured, the newly knighted Segrave’s focus settled on adding the Water Speed Record to the tally.

A new boat was constructed. Again financed, to the tune of £25,000, by Lord Wakefield, Miss England II was powered by two 1,800hp twelve cylinder, Rolls-Royce R-Series aero engines. The two-fold aim was to secure the record but also to win back the Harmsworth International Trophy from the USA. Target speed was 110mph and Lake Windermere was to be the location of the record attempt, which was set for June 1930. Crowds gathered on the lake shore and small craft jostled for position to see Lord Wakefield launch the sleek white boat on 5th June.

High-speed runs started on 10th June, with Sir Henry accompanied by mechanics Michael Wilcocks and Vic Halliwell. An initial test went well, covering the mile at a speed of 107mph, before the propeller broke. After a replacement was fitted, a further two way run was made in which a speed of 101.9 mph would have secured the record, had the official timekeepers been notified. A further run on 12th June reached only 50mph when the propeller broke again. Segrave, good-humoured as ever, announced “I will either break the record or my propellers tomorrow”.

Thousands of spectators lined Windermere’s shores in glorious weather in the early afternoon of Friday 13th, as Miss England II was prepared for the record attempt. With concerns about the propellers, Segrave planned to nurse the boat at only just over record speed but hoped, if successful, to then push for 120mph.

The first outward run went smoothly at record pace and Sir Henry turned Miss England II around ready to make the return leg at slightly increased engine speed. Michael Wilcocks later commented on just how well the boat was running, the hull just touching the water. Then a thud was heard from the front of the hull. Suddenly the boat swerved to port, Segrave straightened it. Then it swerved to starboard, Segrave straightened again, the bow rose in the air and Miss England II was flipped over.

Boats rushed to the scene. Segrave and Wilcocks were lifted from the water; poor Vic Halliwell’s body was recovered later. Segrave was taken to a house on the west side of the lake. His injuries were serious; head injury, arms and ribs broken, a leg crushed. Lady Segrave was with him and could at least give him the news that the record had been broken; the speed was later given as 98.76mph. Sir Henry passed away a little later, remaining conscious for all but his last twenty minutes.

When the wreck of Miss England II was raised from the lake two weeks later, a rupture was discovered in the hull. The official explanation suggested this was the result of hitting a tree branch floating on the lake’s surface, although others have suggested that the hull’s design may have been flawed. The coroner recorded a verdict of accidental death. Speaking years later, mechanic Michael Wilcocks said that he believed that Sir Henry could have thrown himself clear but instead made the split second decision to fight with the controls in an attempt to save his crew. Segrave had declined the chance to wear a life jacket; only one of the three ordered had been delivered and he refused to wear one if there weren’t sufficient for all of the crew.

Just Lady Segrave, Sir Henry’s parents and Lord Wakefield attended a private funeral at Golders Green crematorium. A public memorial service, conducted at the same time, in St Margaret’s, Westminster illustrated how dearly Sir Henry was held in the public’s affections. The church was full, with two hundred more people standing outside. As tributes poured in from around the world, Britain mourned the loss of a true national hero.

Sir Henry Segrave is one of the greatest names from the heroic age of speed. Two of his Land Speed Record cars, the 1927 1,000hp Sunbeam and the 1929 Irving Napier Special ‘Golden Arrow’ may be seen in the National Motor Museum. The latter is the subject of an Arts Council England funded project, Golden Arrow – Shot from the Past, Aimed at the Future, that will interpret and re-tell the inspiring stories behind this truly iconic machine and the people who were associated with it.

2 thoughts on “Sir Henry Segrave – The loss of a hero”