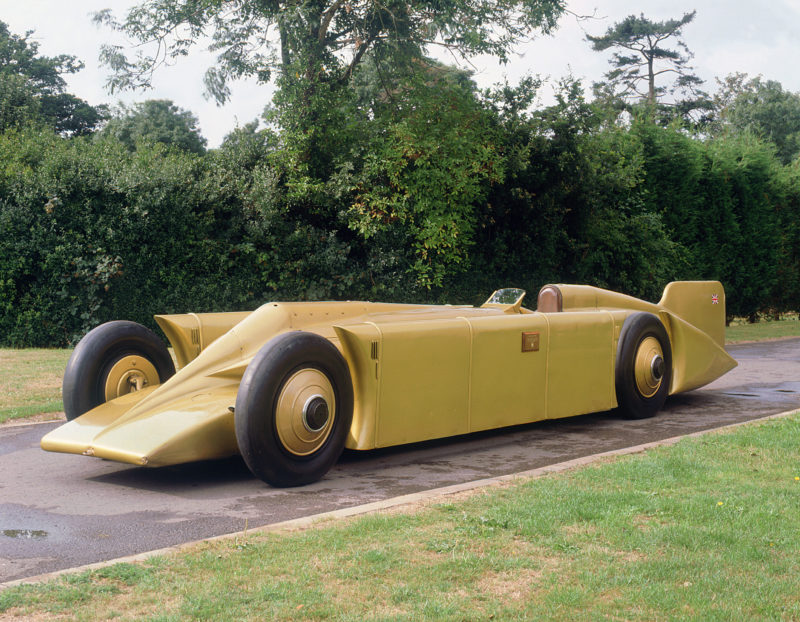 In 1927 Segrave had been the first man to exceed 200mph on land. Malcolm Campbell raised the record to 206.956 mph in February 1928 only to have America’s Ray Keech exceed this by 0.5mph a month later in the ‘Triplex Special’. Segrave was determined to retake the record for Britain.

Officially named the Irving-Napier Special, Golden Arrow was designed by Captain JS Irving. It was built in the KLG spark plug factory in West London with support from many leading British companies. Power came from a Napier W12 Lion aero engine as used in Supermarine Schneider Trophy seaplanes. Irving hoped that Golden Arrow would be capable of 250mph.

Golden Arrow was shipped to Daytona in February 1929 where Segrave made two 180mph test runs. On 11th March 1929 huge crowds gathered on Daytona Beach to watch Segrave make his two timed runs through the measured mile; 15.55 seconds on the first run, 15.57 on the second. The speed of 231.446mph exceeded Keech’s record by 24mph.

The following day an attempt to re-take the record for the USA ended in tragedy when the ‘Triplex Special’, this time driven by Lee Bible, skidded killing both the driver and a film cameraman.

The car was just taken out to Daytona, given a preliminary run and then straightaway attacked the record and obtained it: there was no undue talk, bother or fuss