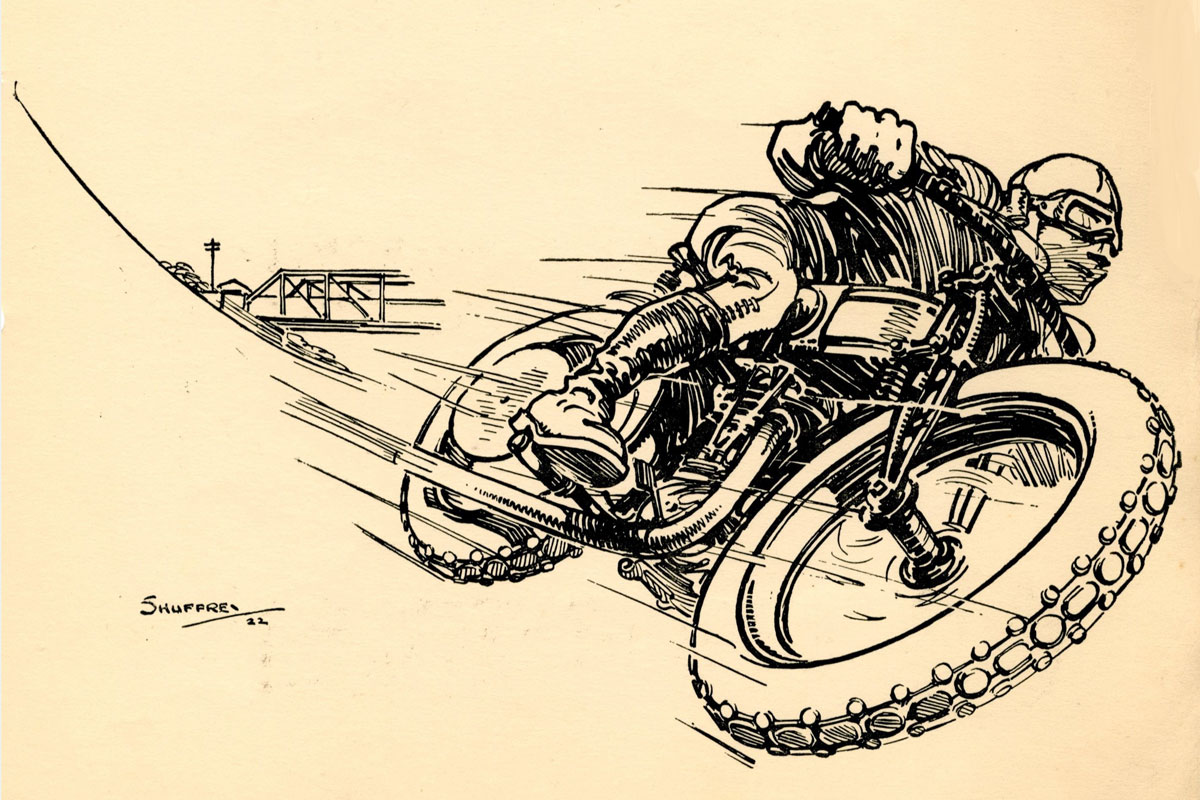 Senior Curator, Sarah Wyatt, sheds some light on an intriguing find from the Motoring Archive which both showcases and lightly satirises leading motorcycle racing figures of the early 1920s. Produced by the Hutchinson tyre company in 1922, it features drawings and rhymes by Reginald Shuffrey. Shuffrey was an important artist of the interwar period and worked for The Motor and The Autocar as well as other contemporary motoring magazines.

Hutchinson is a French company founded in 1853 by Hiram Hutchinson using patents obtained from Charles Goodyear. It started in shoe manufacture and moved into automotive tyres in 1903. A Hutchinson black cat logo features on each page of the booklet with the motto “The Tyre with Nine Lives”.

‘Tyresome Tales’ starts out with A. V. Ebblewhite, official timekeeper for many racing events in the 1920s, including at Brooklands. He is depicted having to fix his stopwatches as they are unable to cope with the speed that the riders can achieve using Hutchinson tyres.

Among the riders included are previous Isle of Man TT winners Howard Davies, Geoffrey Davison, Harry Reed, Cyril Pullin and Tom Sheard. Others are better known for their speed achievements. Bert Le Vack was known as ‘The Wizard of Brooklands’ and held several Motorcycle World Speed Records throughout the 1920s, including achieving a speed of 107.5 mph on an Indian at Brooklands in 1921.

Victor Horsman features as ‘Tyresome Tale the Tenth’. We have the 1951 film ‘Rode Safely’ in our Film & Video Collection, in which staff from Horsman’s Liverpool motorcycle dealership show the right and wrong ways to ride in a variety of conditions, including some hair-raising staged crashes!

Perhaps one of the most notable ‘Tyresome Tale’ inclusions is Graham Walker, father of motor racing commentator Murray Walker. Graham Walker was a well-respected motorcyclist and achieved much racing success despite a leg injury sustained when he was a dispatch rider in the First World War. He is also a significant figure in the history of the National Motor Museum, working alongside Edward, 3rd Baron Montagu, to establish the museum’s motorcycle collection in 1957.

This particular copy of Tyresome Tales is made more special by the addition of the signatures of all 24 of the featured men.