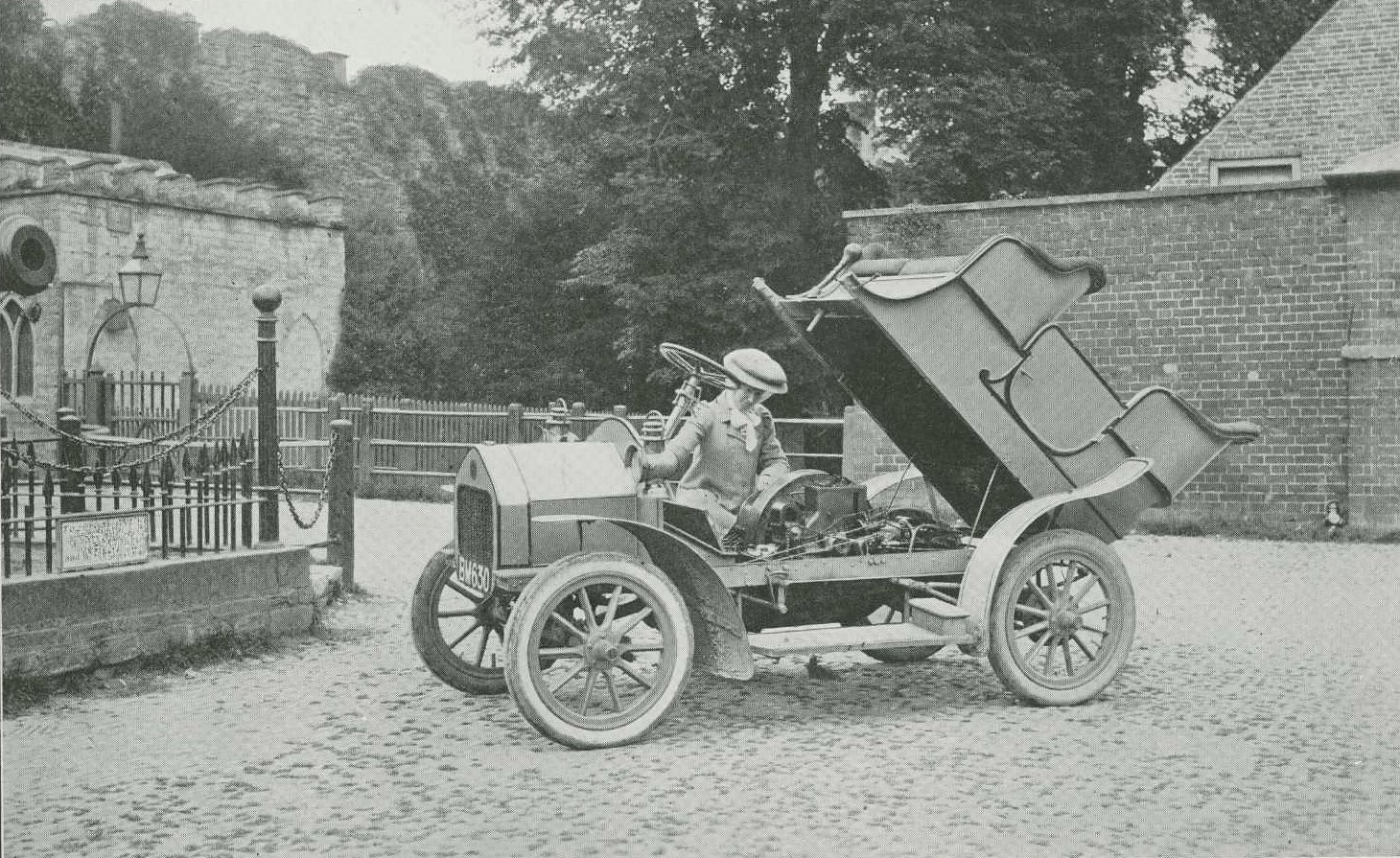 In the early days of motoring, most women were content to let their male chauffeurs drive and maintain their motor cars. During this period, motoring was a rich person’s hobby so wealthy women would have been used to having staff to do these tasks for them. Those women that did drive and maintain their own cars were notable exceptions and often featured in the motoring journals. 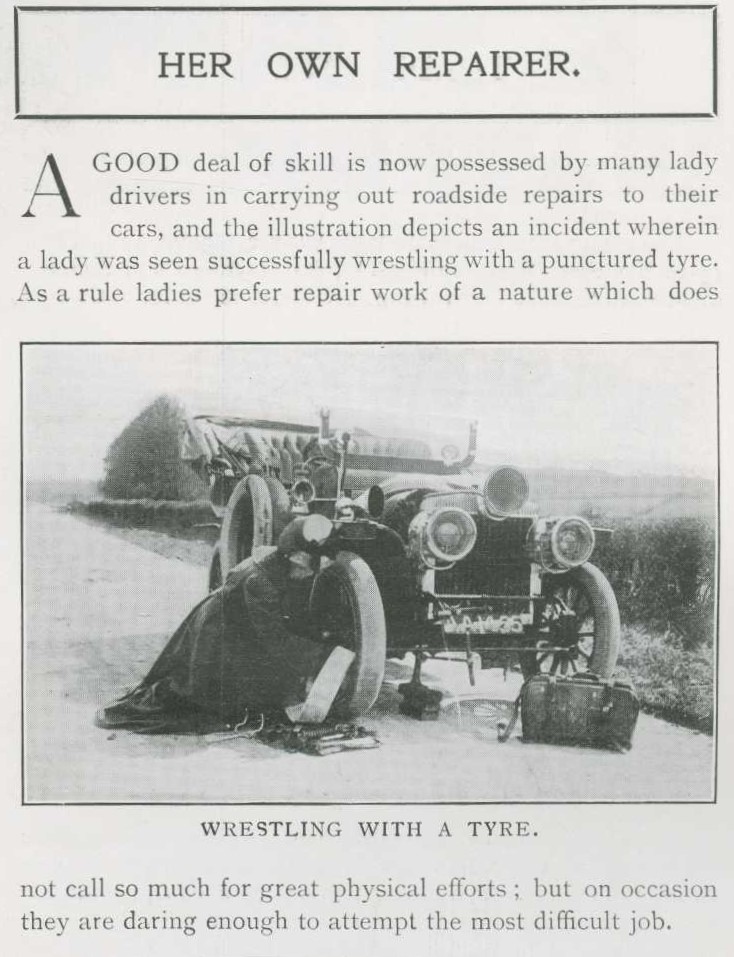 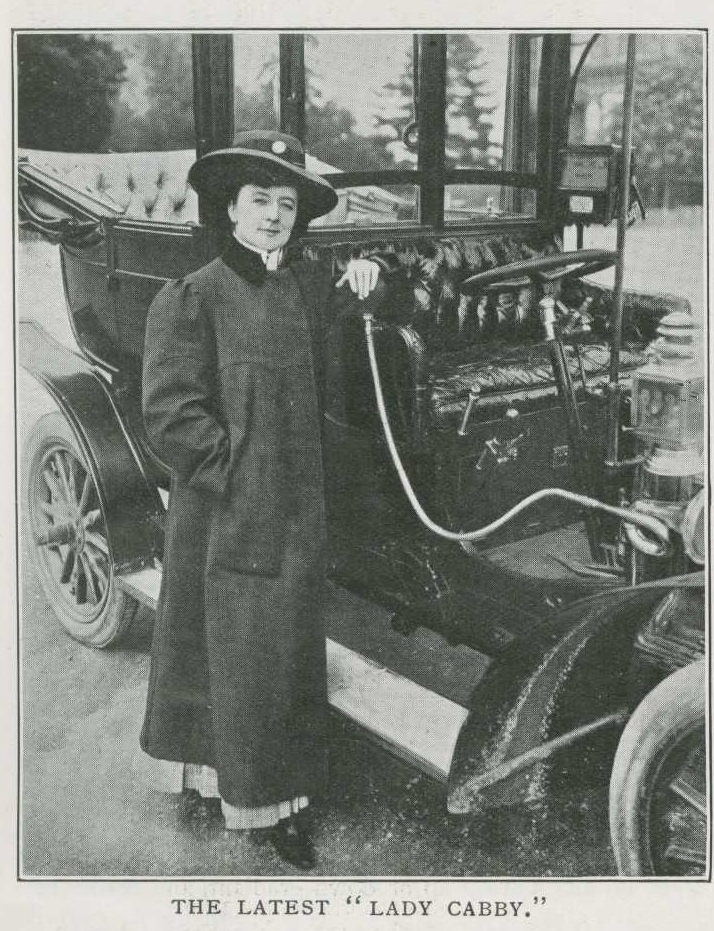 Some women took it further and saw an opportunity for careers that are still today often seen as traditionally male.

Here are some examples of these pioneering women found in the Car Illustrated journal between 1905 and 1915: 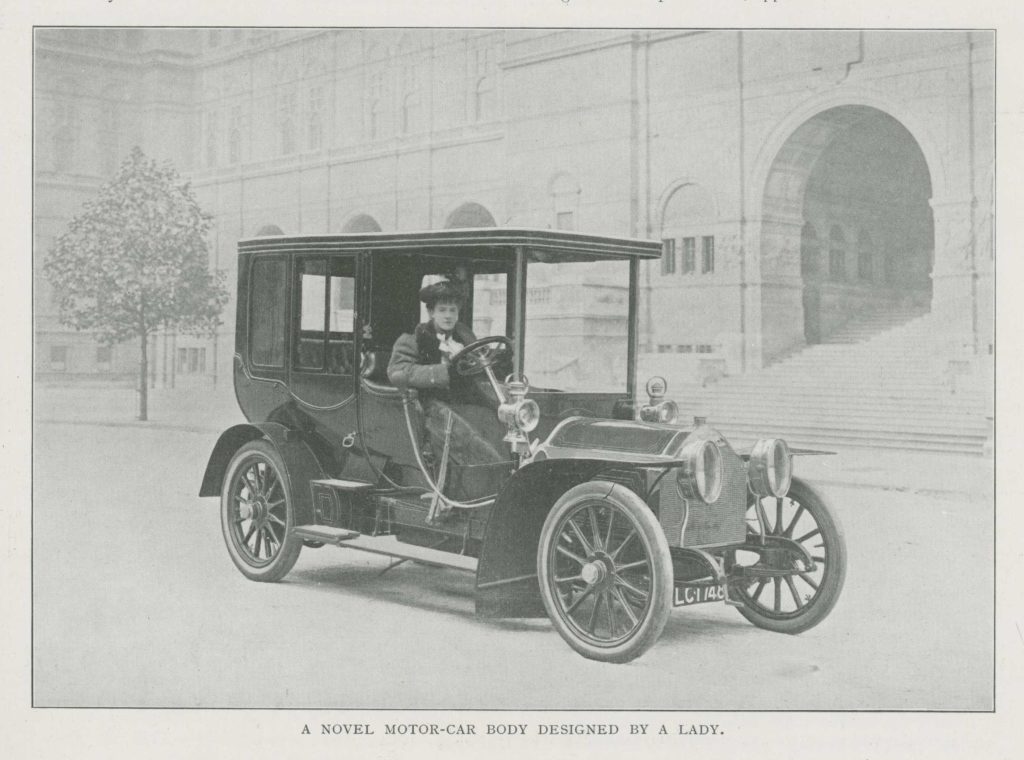 Car Illustrated features two women who became involved in car design. The first is Beatrice Savile in 19051 who designed a versatile car body for a 20hp De Dietrich chassis. Car Illustrated describes it as follows:

The object of the design is to render the car equally good for town or country, day or night, summer or winter alike

The body could be configured as entirely open, partially closed or entirely closed, and as such is deemed “particularly suitable for an invalid’s use”.

Research has revealed that Beatrice Saville was cousin to Princess Ludwig of Löwenstein-Wertheim, also a talented inventor, whose 1927 attempt to become the first woman to cross the Atlantic by plane ended in tragedy. 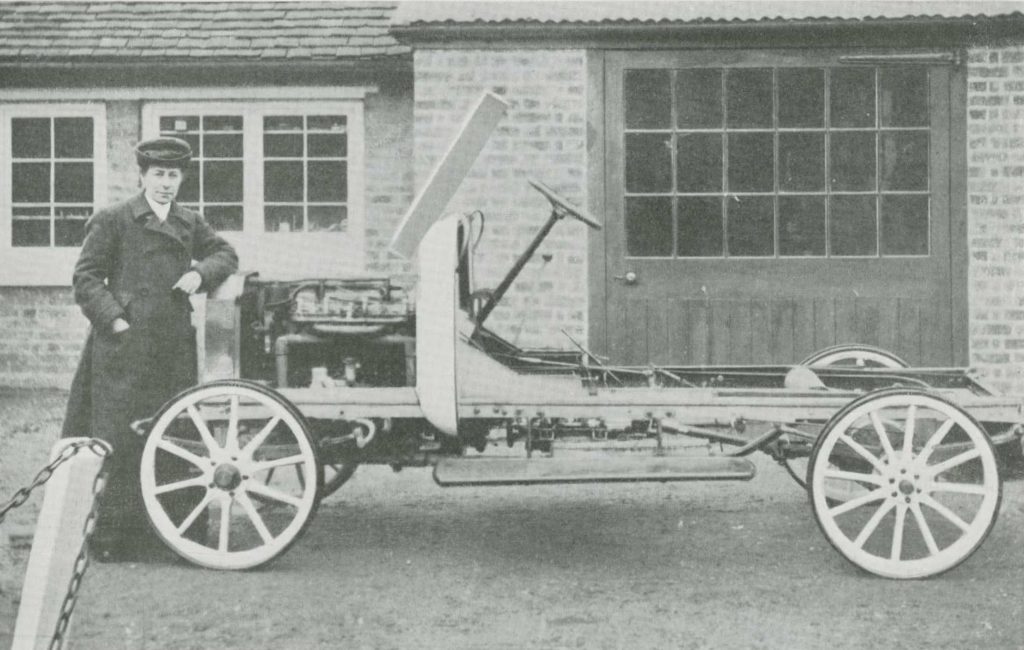 Motorsport pioneer, Mrs Herbert Lloyd is featured in 19082 branching out into designing and building a car chassis fitted with Daimler engine. Although the article does make sure that the reader is made aware that Mrs Lloyd was assisted by her engineer, Fraser, it also recognises her skills in the enterprise:

That lady is very expert with her tools, a good carpenter and leather worker, and her latest achievement has been the turning out of a chassis.

Students from the University of Southampton unearthed some fascinating stories of female chauffeurs during their research on The Drive for Change project.

They include the story of Vera ‘Jack’ Holme, who was chauffeur to the Pankhursts and a militant suffragette. Car Illustrated mentions her in a 1911 piece titled ‘England’s Only Lady Chauffeur’3. They picture her signing a petition to King George V to cancel endorsements on licences in celebration of his coronation. There is no evidence to suggest whether this was successful or not but is most likely to be a case of extreme wishful thinking. The article states that Vera Holme had been driving an Austin car for the Women’s Social and Political Union (WSPU) totalling over 50,000 miles. 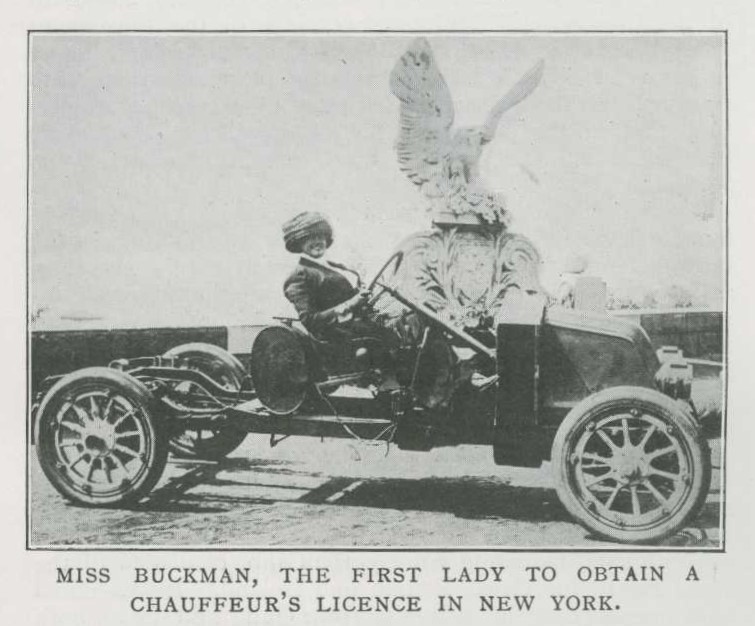 Another female chauffeur reported upon is Miss E Buckman, who is cited as being the first woman in New York to obtain a licence to drive public service vehicles. The article is clearly disapproving of Miss Buckman’s choice of clothing:

This lady has carried her daring to another degree by deciding to adopt male attire when at work, as she considers that skirts are quite unsuitable for the lady chauffeur. Nevertheless, in Europe many lady drivers have managed to drive cars in quite a skilful fashion without such a change of raiment.4

The notion of women as taxi drivers garners quite a lot of coverage in Car Illustrated and it is fair to say that this development is not altogether welcomed. In ‘The Motoring Review of Reviews’ (in which  quotes motoring stories from other publications), there is a 1907 piece5 quoted from ‘Modern Society’ which describes male discomfort at a female taxi driver, and how embarrassing it would be for a man to be driven by a woman: 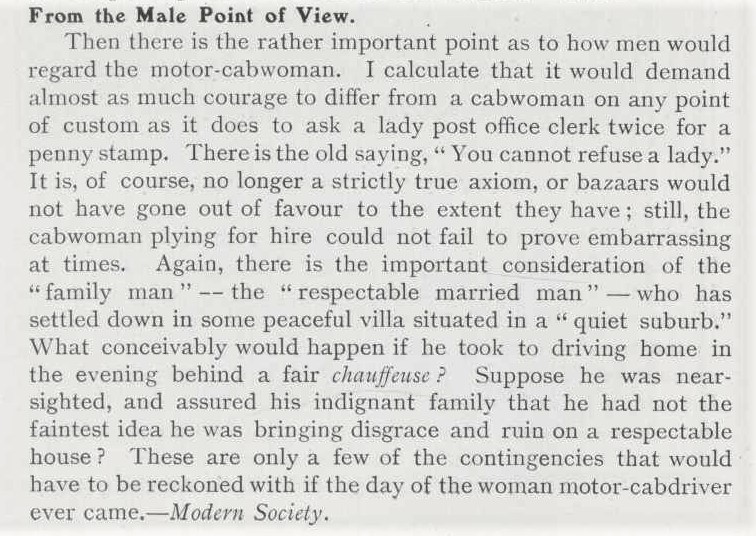 Car Illustrated features a number of female taxi drivers, which seems to have begun with Madame Decouge who was the first woman in Paris to obtain a certificate permitting her to drive a motorised taxi in 1907.6 In November of the same year ‘Frau Poppe’ is reported as being “the first woman cab-driver in Berlin, if not in all Germany”.7 However, by 1909 ‘lady cabbies’ are being described as a ‘complete failure’ in France and Germany.8 But in London, an Irish woman circumvented police regulations that banned women from driving a vehicle for public hire by driving the car when it is hired out from the garage supplying the vehicle. The article finishes:

“Miss O’Neill”, as the lady calls herself, made her debut in very bad weather last week, but she seems determined to carry on the work.

Car Illustrated has a full-page article in 1914 on a driving school run by Miss Addis-Price, written by G. Ivy Sanders. Sanders is impressed by the tact and patience Miss Addis-Price displayed to her pupils, especially in comparison to the writer’s experience of an exasperated male instructor:

It was indeed a rare treat to note the extraordinary patience displayed by Miss Price in explaining over and over again this and that part of the engine and the car, to hear her mild constant corrections of the inevitable confusion of carburetter and magneto9

Daisy Addis-Price also raced a Douglas at Brooklands in the 1920s. When she died in 1950, she left “a considerable fortune to her lifelong lady companion”.10 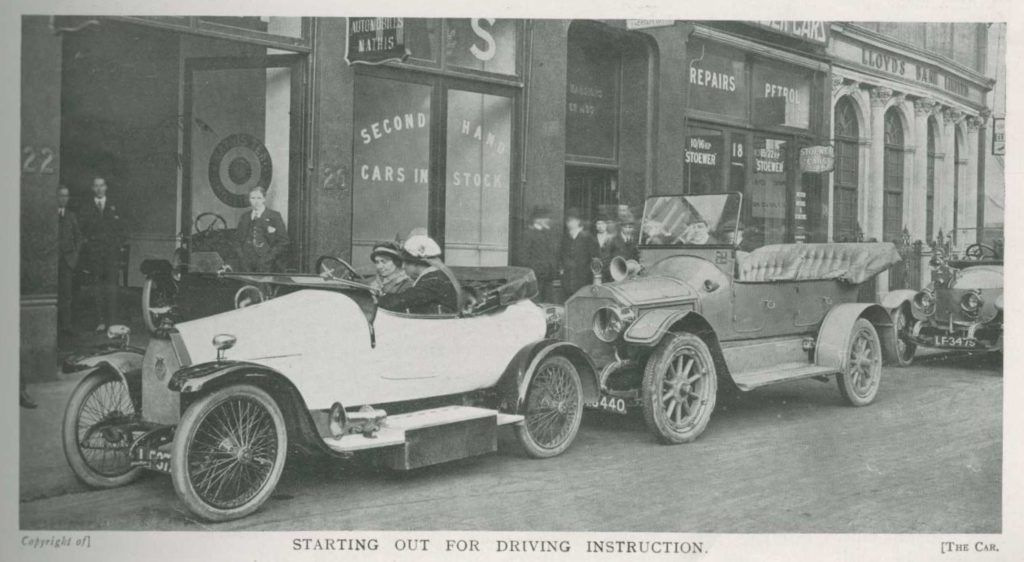 Another woman featured in Car Illustrated giving driving instruction is June Larkins. She was appointed by the Wolseley Company car manufacturers in 1904 to teach their female customers how to drive and manage their cars. It also mentions that she participated in motorboat trials in Southampton Water in 1903.11

Two interesting garage related stories can be found in Car Illustrated. The first is a letter from Miss Gladys de Havilland taken from the Daily Chronicle in 1913 for the ‘What Others Say’ part of the journal12. Headed ‘A Motor Saleswoman’s Experiences’ she says:

I much prefer being on the road – a sort of commercial traveller – to being in the showroom. To my mind it is easier to sell cars this way; and, also, it is a good advertisement for the cars one drives.

Further research reveals that Gladys de Havilland was the sister of aviation pioneer Geoffrey de Havilland. In 1918 she published ‘The Women’s Motor Manual’ which, in the context of the war, covered both civilian and military driving available to women at the time. The manual includes technical details of vehicles and maintenance tips. Gladys de Havilland also drove an Austin 7 “Chummy” around the world in 1928-29. 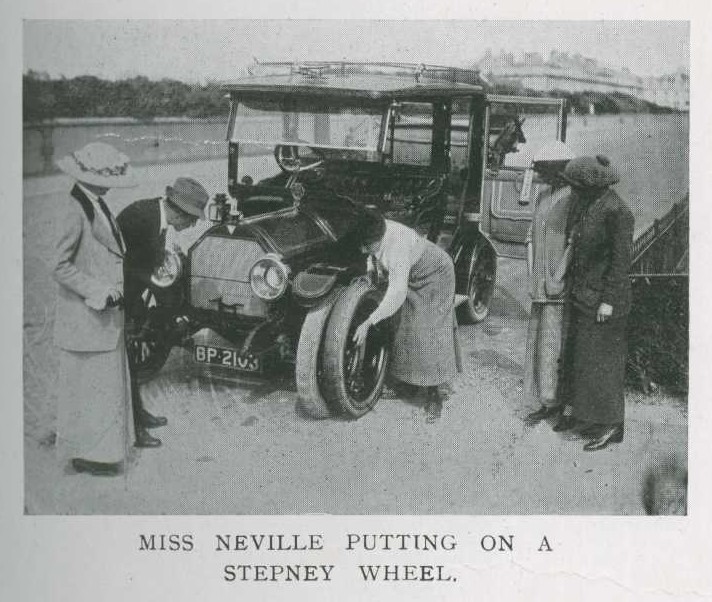 A 1913 article features Miss Alice Neville, the proprietor of a garage in Worthing. Obviously very hands-on, the article states that:

She gives instruction in motor-cycle driving, does her own repairs to cars and cycles, and carries out successfully all the work attached to her business.13

The impact of the First World War

Undoubtedly, the First World War enabled women to access more work opportunities in traditionally male dominated fields and perhaps advanced the cause for female emancipation as much as the campaigning of the previous decades. This 1915 letter14 to Car Illustrated demonstrates how views were changing as more women got behind the wheel and under the bonnet: 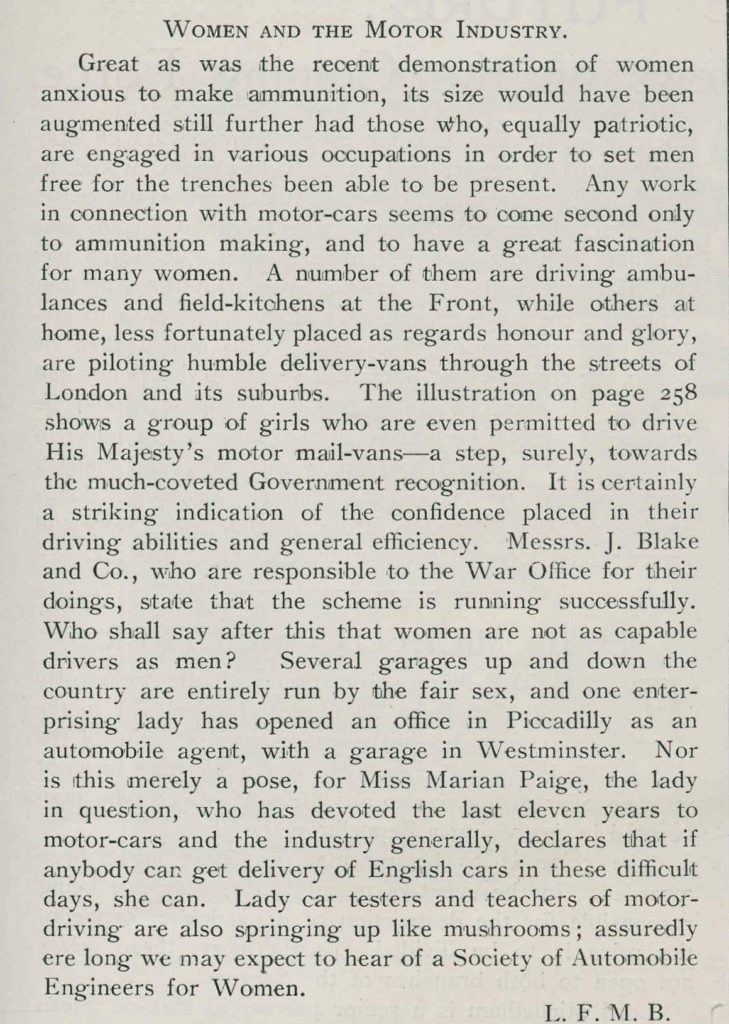