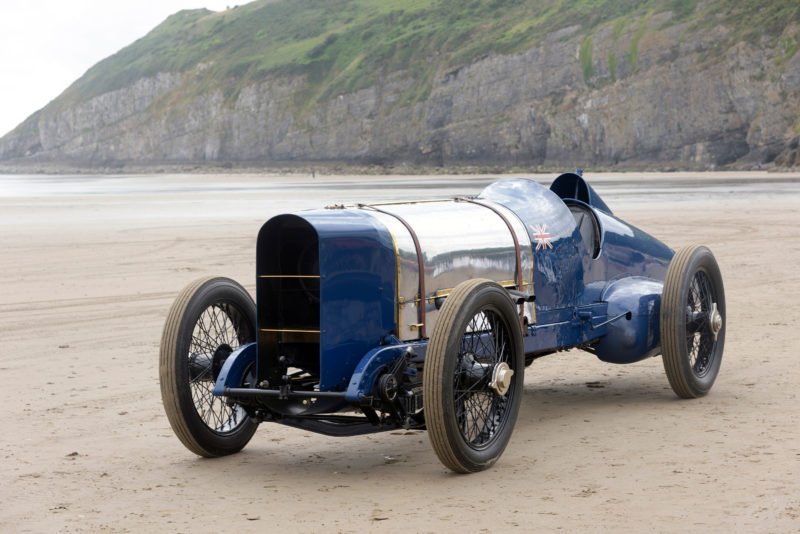 The 350hp Sunbeam was one of the most significant Land Speed Record cars, holding the record on three occasions. It was designed by Sunbeam’s chief engineer Louis Coatalen and built at the company’s Wolverhampton works during 1919 and early 1920. Power came from a modified 18 litre Sunbeam V12 ‘Manitou’ aero engine. Transmission was via a four-speed gearbox and drive shaft.

Famous drivers such as Harry Hawker, Rene Thomas, Jean Chassagne and Kenelm Lee Guinness raced the car with varying amounts of success. Guinness drove it to its first Land Speed Record, achieving 133.75mph at Brooklands on 17th May 1922.

Captain Malcolm Campbell purchased the car from Sunbeam in 1923, undertaking the first of several rebuilds, and repainting it in his famous blue livery as it became the latest in his line of cars to carry the name ‘Blue Bird’. In September 1924, Campbell claimed the Land Speed Record with a run of 146.16mph at Pendine Sands. He returned to Pendine the next year and on 21st July became the first person to break the 150mph barrier with a new record of 150.76mph.

The car threw sand and spray far and wide, and it travelled amazingly well. Its fastest speed was 152.8mph and we actually set up a new World record with 150.7mph through the measured mile. This, I felt, was indeed a milestone in the history of motor-racing.