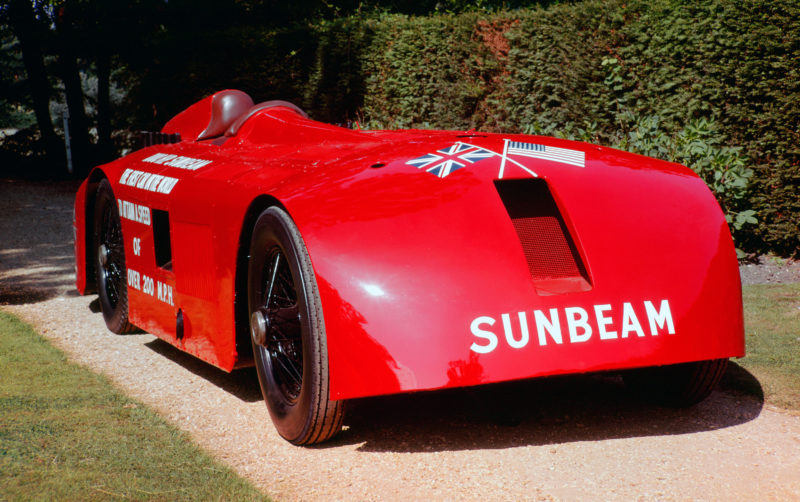 The impressive 1,000hp Sunbeam was one of the first purpose-built Land Speed Record cars and the first to reach 200mph. The driver was Major Henry Segrave, a previous record holder at the wheel of a 4 Litre Sunbeam at Southport in March 1926.

The concept for the car came from Sunbeam’s Chief Engineer Louis Coatalen with detailed design work by Captain J S Irving. Power was from two 22.5 litre V12 Matabele aero engines, each delivering 435bhp. These were positioned in line with the driver’s cockpit in between. Transmission was via three-speed gearbox, driveshaft and chains. Actual power output was around 900hp but the 1,000hp title probably appealed to Sunbeam’s directors.

It was estimated that a venue at least nine miles long would be needed to reach 200mph. With nowhere suitable in Europe, Segrave chose Daytona Beach in Florida. The car was largely untested when it arrived in the USA in early March 1927.

The record attempt took place on March 29th 1927, with 30,000 spectators watching from the nearby sand dunes. During the first of the two runs the wind caused the car to swerve and skid violently with Segrave having to drive the car into the sea to slow it down. The speeds achieved were 200.668mph and 207.015mph giving an average speed of 203.792mph and a new Land Speed Record.

Malcolm Campbell’s telegram to Segrave after he took the record.